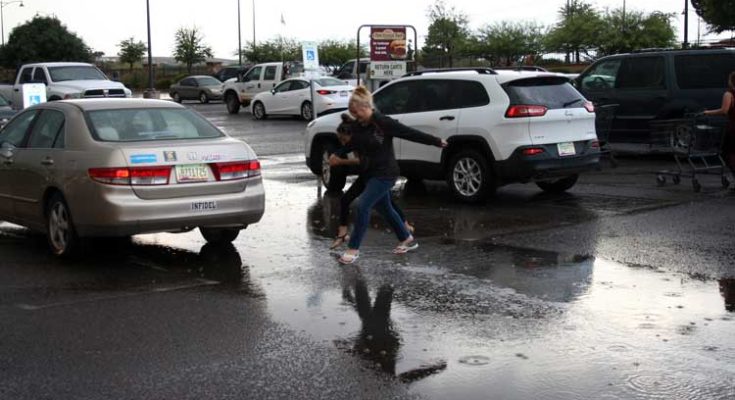 Photo By Walt Mares: A woman carefully makes her way across draining rainwater in the Bashas’ parking lot in Morenci. A rather heavy rainstorm hit Morenci and Clifton in the late afternoon Wednesday, June 6. It had not rained since mid-February.

MORENCI – There was a long, jagged flash of light in the sky. It was followed by at least two more flashes. So, what was the big deal about them, and what about those two colorful arches that eventually appeared in the sky?

It had been at least five months since lightning had appeared in the sky over Greenlee County. The lightning portended what was about to happen – a rainstorm. It had also been five months since it rained in Greenlee. It was not a cloudburst – thank heaven – but it was enough to soak anyone out in the open and create that special aroma of water landing on dry dirt.

Immediately after the storm, folks were treated to a special sight – what some might call a gift from heaven. A rare double rainbow appeared as the sun began sinking in the west. Viewed from the parking lot of the Morenci Conoco, the rainbows appeared in contrast to the rugged hills and peaks around Clifton. As costumers drove up to the store, almost everyone commented on the beauty of the multi-colored arching bands in the sky. Some folks, appearing almost bewildered, took a few minutes to just stare at the sight  According to Freeport McMoran mining company meteorologist James Hogan, .25 of an inch of rain fell during the storm.

The windshield wipers of vehicles also had their first workout in nearly half a year. They were in full motion clapping time to provide visibility for motorists.

Rain fell hard for about an hour beginning around 5:30 p.m. In Morenci, people dashed to their cars in the parking lots of the Morenci Plaza. At Bashas’ grocery store many people waited inside until the rain subsided. But even after the rain stopped, many had to negotiate their way around or through rainwater that was still draining in the parking lot. The draining water at one point was about ankle deep.

A heavy rain also fell in nearby Clifton. Duncan, in southern Greenlee and about 35 miles from Morenci, had a hard rain but it reportedly lasted only about 5-10 minutes.

Customers who were sitting on the patio at Starbucks in Morenci said they wondered if the dark clouds that appeared to be approaching from the southeast would actually bring rain. They were skeptical. After all, there had only been two rainstorms since July 2017. The most recent storm fell on Feb. 16 of this year.

A reporter sat at a table at the porch-like area at the front of Bashas’. Just about everyone who passed by him said, or outright exclaimed, how welcome the rain was. It was, after all, a break from the 100-plus degree, bone-dry weather of that had settled in around Greenlee County. The only type of storm that had blown through was what one elderly Clifton man used to call “Arizona Rain”, meaning dust storms.

Some people interviewed Thursday said the outdoor temperature Wednesday night was cool enough to turn off their air conditioners and open their windows at home allowing a cool breeze to make the night comfortable enough to sleep in.

A Morenci man said Thursday that the drawback to the storm was the humidity combined with heat that began making the day a bit more uncomfortable than dealing with heat alone.