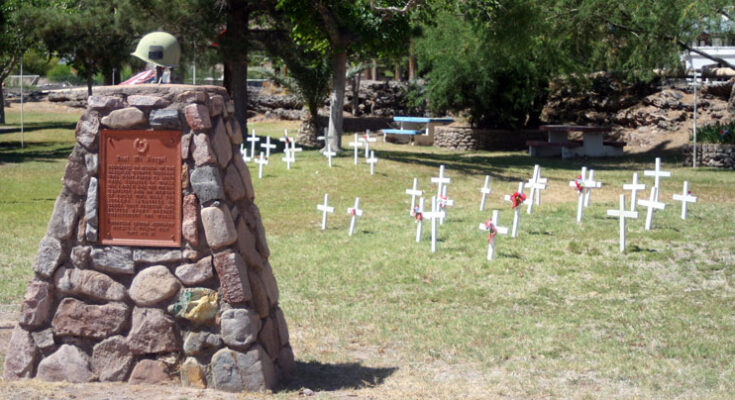 Photo By Walt Mares: White crosses cover the grass at Clifton’s Veterans Park in preparation for Memorial Day on May 30. The crosses honor those who served America in the U.S. Armed Forces and have since passed away. The helmet on the monument belonged to the late Emilio Membrila. He served in the U.S. Army during World War II. He fought in the heroic and famous Battle of the Bulge in Europe. Membrila was taken prisoner by the Nazis but survived and was released at the end of the war when Germany finally surrendered to Allied forces. The battle was known not only for its ferocity but also for the heavy snowstorms and freezing cold temperatures. Membrila, a highly respected veteran, was an active member of the Clifton-Morenci American Legion Post 28 at the time of his passing.

A thank you is deserved to vets, civilians

CLIFTON – To some people, it is just another day off to enjoy a three-day weekend. It is a time to haul the family up to the high country and its cool temperatures. For many, Memorial Day weekend marks the beginning of hot weather here in the high desert of Greenlee County.

For yet others, it is a day to visit the graves of family members or friends and remember them. Perhaps they decorate graves with real or plastic flowers or other objects,

The actual designation of Memorial Day is to honor those who died serving their country in the military. The day has a most interesting history. It was originally referred to as “Decoration Day,” and eventually became known officially as Memorial Day.

The day has its roots in the Civil War. There are at least a dozen towns in the eastern and southern U.S. that lay claim to being the birthplace of what eventually became known as Memorial Day. Snopes, a website known for its thorough research and credibility, cites an incident that occurred in 1865 around Charleston, South Carolina. A Confederate-run prisoner of war camp was located there.

There were 257 Union troops who met their deaths there while imprisoned at the POW camp. The Yanks were buried in haphazard, common unmarked graves. At the war’s end in 1865, a group of slaves disinterred the bodies and buried them in what was to them honorable and decent graves. The slaves then decorated the graves with flowers and other objects. Their efforts were wrought of gratitude to the Union soldiers and their efforts to free slaves.

There were those who disagreed with the change of the day and resented a change in a time-honored tradition. Their complaints were dismissed, especially when Americans could stretch out the holiday to three days.

This weekend, American Legions Posts throughout the U.S. will be placing flags on the graves of veterans that can still be identified. In Greenlee County, they will do so at cemeteries in Duncan, Clifton, Morenci, and Sheldon. It may be worth a person’s time to realize just how many from Greenlee have made the ultimate sacrifice for our country.

We are also delighted knowing there will be people visiting and possibly decorating the graves of family members who may not have been in the military, but who in their own way contributed and made personal sacrifices to make possible the freedoms and blessings we enjoy in this, the great United States of America.

Some of us will be remembering the humble beginnings of “Decoration Day” and say a deep prayer of gratitude for our ancestors, be they veterans or civilians. It does not matter what the day is named.

One flown to Tucson hospital in crash in Black Hills 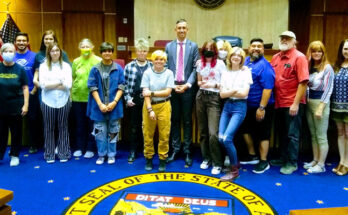