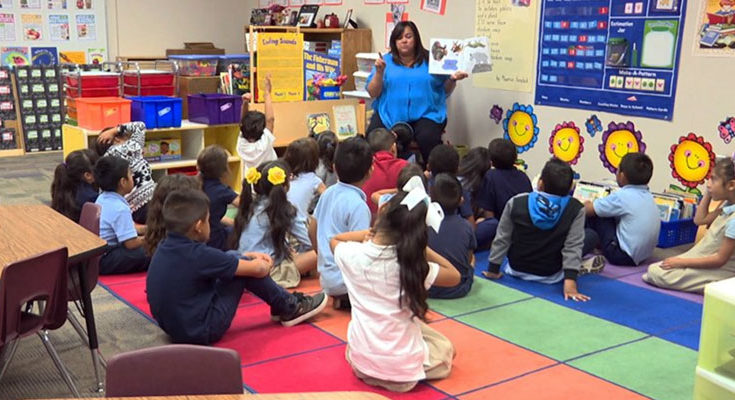 Blakely McHugh File Photo/Cronkite News: Michelle Doherty in a photo from 2017, when she was named Arizona Teacher of the Year, said low teacher pay was forcing some out of the profession. A federal court Tuesday rejected a challenge to Arizona’s Proposition 123, which is expected to send an estimated $3.5 billion to schools over 10 years.

PHOENIX – A federal appeals court Tuesday rejected a long-simmering challenge to Proposition 123, the voter-approved 2016 measure that is set to redirect an estimated $3.5 billion to Arizona public schools over a decade.

A three-judge panel of the 9th U.S. Circuit Court of Appeals overturned a lower court ruling in the case, which has been pending since the day after Prop 123 was passed by a margin of just 1.5%.

Phoenix resident Michael Pierce had argued that the state could not transfer funds from the state’s land trust, as the proposition does, without congressional approval and a federal district court agreed. But the appeals court said Tuesday that Congress made the necessary approvals in 2018, leaving Pierce “without a case or controversy,” and it reversed the lower court.

The legal challenges did not hold up the school money, but Chris Thomas, general counsel for the Arizona School Boards Association, said it is still “good to get this chapter behind us.”

The Arizona Department of Education said it was “unable to provide a comment” on the ruling Tuesday, but Gov. Doug Ducey’s office hailed it as “a victory for our public schools and students and the people of Arizona.”

Pierce’s attorney, Andrew Jacob, said Tuesday’s decision comes as no surprise since the appeal turned on the narrow question of whether Pierce even had the standing to sue.

“It’s always difficult to show standing in federal court when you have the same relationship in the issue that a large number of people have,” Jacob said. “Our position was that every citizen has (the) standing to enforce the Enabling Act.”

The “Enabling Act” is the 1910 law that led to statehood for both Arizona and New Mexico. It set land into trust for the states to use on schools but required that they get congressional approval before spending money from the fund.

Prop 123 increased the amount of school funding from the Permanent State School Fund from 2.5% a year to 6.9% a year for a period of 10 years.

On appeal, Pierce argued that until Congress votes that it no longer wants oversight on what the state does with the money in the fund, future spending needs to be approved.

“The governor is still insisting that he didn’t have to go to Congress to change it,” Jacob said. “We’re just looking for a court to say, ‘No, Governor Ducey, you’re wrong. If you try to change the formula, you do need to go to Congress.’”

But in a statement from his office, Ducey defended the proposition.

“Arizona and its leaders came together in historic fashion to pass Prop 123,” he said. “Nearly every branch of government affirmed it—the Arizona House and Senate, the Arizona courts, the governor, the United States Congress, and the President of the United States—and it was approved by the people of Arizona.”

Good news for Arizona! Today, the U.S. Court of Appeals for the Ninth Circuit overturned the U.S. District Court decision on Prop 123. This decision is a victory for our public schools and students and the people of Arizona. 1/

He said there is still more work to do, noting that the funding mechanism lasts only until 2026. That point was echoed by Thomas, who said policymakers now need “to figure out how to fund schools going forward.”

“It would be worth it for the governor and state policymakers to be thinking about how they are going to figure out how they are going to get additional funding from the state’s general fund to cover that cost,” Thomas said. “Once that ends, the state no longer has access to the trust. I hope they don’t wait until 2023 or 2024 until they start making those decisions.”

The proposition was always intended to be a Band-Aid until a more permanent solution is proposed.

“We’re fine until then, but we’re going to have to figure out a fix for after that,” Thomas said.