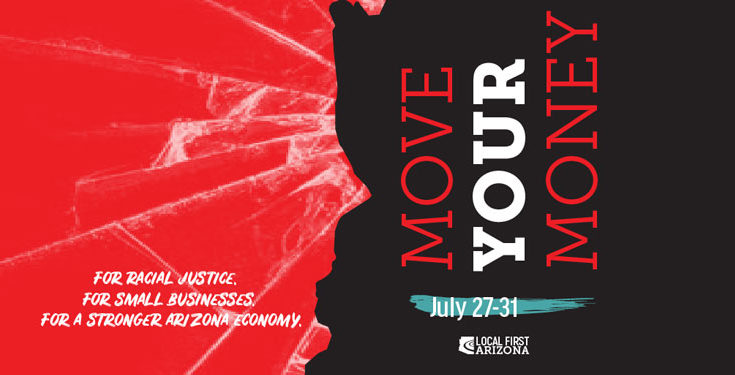 PHOENIX – From July 27-31, 2020, Local First Arizona will hold a weeklong campaign to inform Arizonans that keeping their checking or savings account in a global big bank, such as Chase, Bank of America, or Wells Fargo, enables and supports modern-day “redlining,” a discriminatory lending practice that hurts communities of color and small businesses which will impact how quickly Arizona recovers from the current economic crisis.

“Ninety-one percent of Arizonans’ deposits, earned by hard-working residents, sit in non-local, out of state banks. Roughly 70 percent of those deposits, totaling $88.5 billion dollars, sit in three megabanks. And while this doesn’t seem to impact day-to-day life, it directly impacted whether or not many small businesses were able to receive federal help during this pandemic and will dictate who in our community gets access to capital in the days ahead,” said Local First Arizona Executive Director Thomas Barr.

On top of sharing facts, figures, and local success stories, the Move Your Money campaign will ask Arizonans to pledge to move their money into a local bank or credit union as a strategy for building a more resilient Arizona economy.  A “Move Your Money Switch Kit” on how to seamlessly start the process will also be provided, more can be found at www.banklocalaz.com.

Arizona only has 13 local, community banks that recirculate a significantly higher amount of dollars back into the local economy through loans, large and small. This is a dangerously low number in comparison to other states; Texas, with 407 local banks; California, with 133 local banks; and Colorado with 73 local banks.

“Upping Arizona’s local lending power is one powerful way to make a dent in the racial wealth divide and prepare us for future storms. While bigger banks prioritized bailing out big companies, corporations, and chain stores, local banks focused on getting funds to small and mid-sized business owners, owners of color, and rural businesses, and they do this all year long, even when the world isn’t watching,” Barr said.

When a community bank receives more local deposits, it has more local money to lend in the state they are chartered. This is critical in an economy like Arizona’s where small businesses make up 99 percent of total businesses and employ about 40 percent of Arizona’s private sector workforce. Community banks get creative, come up with catered solutions for small businesses, and provide them with the right capital needed to compete, create jobs, and thrive.

“The 2020 Federal Reserve Small Business Credit Survey noted that non-Hispanic black owners are half as likely to have obtained bank funds as non-Hispanic white owners, 23 percent versus 46 percent respectively,” said Gateway Bank President and CEO James E. Christensen. “Gateway’s inclusive, tenured team has deep experience and is always willing to listen, learn, and consult with minority-owned small businesses. While this is a start, confronting racism is ongoing work, and we’re committed to doing it. We want to be part of the solution, starting in our own backyard.”