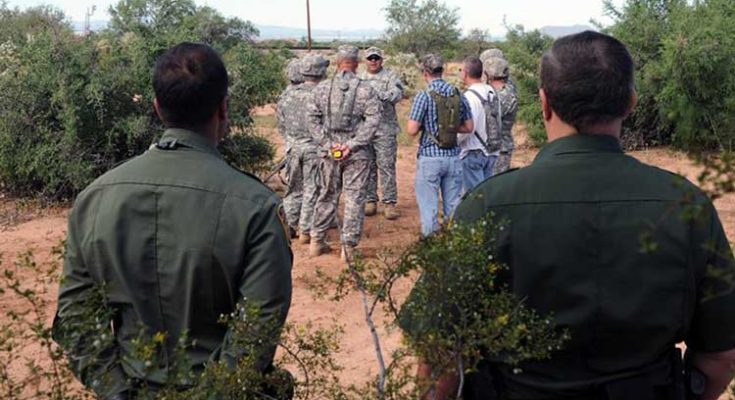 Photo by Army Staff Sgt. Jim Greenhill: Border Patrol agents watch Arizona National Guard Soldiers in 2010 as part of Operation Phalanx, which saw the deployment of 1,200 guardsmen along the southern border. The Trump administration says it wants to send guard units to the border again.

WASHINGTON D.C. – The secretary of Homeland Security said Wednesday that her agency is working with border-state governors to send National Guard troops to the southern border as quickly as possible to support Customs and Border Protection.

“It will take time to have the details in place, but we are beginning today and we are moving quickly,” Secretary Kirstjen Nielsen said at a White House briefing.

Despite the lack of details, Arizona Gov. Doug Ducey tweeted out his support for the plan earlier Wednesday, saying that “Arizona welcomes the deployment of National Guard to the border.”

Arizona welcomes the deployment of National Guard to the border. Washington has ignored this issue for too long and help is needed. For Arizona, it’s all about public safety.

It came one day after President Donald Trump announced his plan to use the military along the border, saying, “Until we can have a wall and proper security, we’re going to be guarding our border with the military.”

Trump was scheduled to meet Tuesday afternoon with Defense Secretary James Mattis, and Nielsen said the administration has been moving as fast as possible to put the plan in place.

“We’ve been very specific, state by state, locale by locale, of what CBP believes they need, and then we’ll work in conjunction with the governors who are in fact on the front line, to see what they need,” Nielsen said. “I have spoken with all the governors and will be continuing these conversations.”

Texas Gov. Greg Abbott, who deployed National Guard troops to the border after his 2014 election, joined Ducey in his support for the plan.

“Today’s action by the Trump administration reinforces Texas’ longstanding commitment to secure our southern border and uphold the rule of law, and I welcome the support,” Abbott said in a statement released by his office.

Nielsen said she did not want to get ahead of the governors, who have authority over guard units in their states, but said the deployment would likely be similar to those of past presidents and will provide as many troops as are “needed to fill the gaps.”

Both presidents used the Guard units to support Border Patrol as it was building up infrastructure and recruiting new agents.

Nielsen said that, as of now, guardsmen are not expected to be doing actual border enforcement but will be doing support to free up the Border Patrol agents who do.

“We have specified out the missions where we need support,” she said. “They include everything from aerial surveillance, which as you know was under Operation Phalanx, through to some of the support functions that the guard was able to do under President Bush in Operation Jump Start.”

The Mexican Foreign Ministry said it had been assured by Nielsen that guardsmen sent to the border during this latest deployment would have roles similar to the previous operations and “will not carry weapons or have immigration or customs duties.”

“In all of its communications on the topic, the Mexican government has stated to the U.S. government that if the announced deployment of the National Guard results in the militarization of the border, it would seriously damage the bilateral relationship,” the ministry’s statement said.

White House officials repeated their assertions that troops are needed because of a large uptick in illegal immigration this year.

A Customs and Border Protection report said 2017 saw the “lowest level of illegal cross-border migration on record.” The agency said there has been a slight increase so far in 2018, but that the numbers are still lower than years past.

But while February had the third-lowest monthly apprehensions since 2000, newly released numbers for March show what White House officials on a conference call with reporters Wednesday called a “staggering uptick” in border apprehensions that make clear why this move is necessary.

Whatever the numbers say, the White House officials said the increased border protection means “now is not a smart time for folks to be paying that money to come to the United States” illegally.