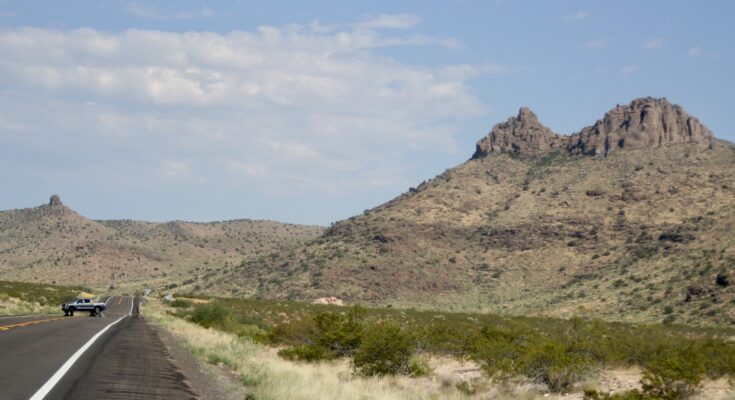 Walt Mares Photo/Gila Herald: A rock formation known as El Gato looks like a “gato” (cat)  along Highway 191 through the Black Hills. More than a century ago the road was once known as Tollgate Canyon. The cat appears to either be resting or ready to pounce. It is a most familiar sight for those who drive from Safford to work at the copper mine in Morenci. It looks nothing like a cat when headed toward Safford. In the background is Thumb Butte nicknamed “La Teta” or “The Nipple.” It marks the Greenlee-Graham County line.

GREENLEE COUNTY – While growing up in the small mining town of Morenci, Arizona, in the 60s and 70s, I came to know the unique and interesting family of Dick, Frances and Becky Powers.  During one of my many visits to the Power’s Ranch in Guthrie, I noticed that they had a large map of the local area mounted on their wall.  It had minute and incredible detail down to individual houses and natural features.

I was at once transfixed and intrigued. Prior to seeing this I had no idea this type of map existed. This was to be my first introduction to the fascinating and revealing world of cartography and topographical maps.  Soon, I had obtained my own collection of “topo” maps of the area from the S & S Sporting Goods Store in Clifton.  I would spend hours poring over the maps of my region learning the names and location of places and landmarks.

Some places I had heard of and recognized, such as Eagle Creek, Granville, and Mulligan’s Peak. Others were completely new to me.  One area caught my eye, “Tollgate Canyon,” along a portion of what was then named U.S. 666 through the Peloncillo Mountains, more commonly known as the “Black Hills.”

It seemed like such an anachronism and a mystery.  I asked myself, ’who would build a toll road in the middle of the Sonoran Desert and why?’  Those questions led me to a little- known history of the region, the people who lived there, and some of the challenges they faced and surmounted.

It’s hard to believe in this era of interstate highway systems, paved, smooth, well- maintained roads with steel and concrete bridges that it once took three days to reach the Graham County seat of Solomonville (now Solomon) from the Clifton-Morenci Mining District, which at the time was part of Graham County.

However, in 1890 one had three options. The first was via horse or mule pack train if one was transporting goods or cargo, and involved venturing north and east along the Gila River to Bonita Creek.  The journey then led to Eagle Creek and then on to Morenci on a northeast bearing.

The second choice was a bit easier and navigable by wagon. This route led south and east along San Jose Wash to Ash Springs Canyon then northeast to Sheldon. It then followed the Gila River north to the railroad station at Guthrie.  The route then followed arroyos through the hills northwest on to Clifton.

Both of these routes were chosen due to the availability of water along the way and passable terrain.

The third option was to take the train from Solomonville on the Gila River Globe and Northern Railroad south to Bowie, change to the Southern Pacific east to Lordsburg then take the Arizona & New Mexico Railroad north to Clifton.  The A&NM train depot stands to this day and is the foremost of Clifton’s historic structures.

As early as 1885, the Detroit Copper Company envisioned and surveyed a railroad line directly linking the Gila Valley and the Clifton-Morenci Mining District. During this same time frame, the Gila River Globe and Northern Railroad also made tentative plans for a line from Solomonville via Ash Spring Canyon to Sheldon, thereby linking it with the A&NM RR. However, both of these plans failed to materialize.  In addition to the conduct of official business, routes to the then-booming towns of Clifton, Morenci, and Metcalf were vital to transport lucrative crops of produce and other goods to the miners and their families.

In 1899, an enterprising resident of San Jose, which was, and still is, an agricultural community at the head of the Gila Valley, found a shorter route to the Clifton-Morenci Mining District. Francisco Montez noticed a short cut could be made from the Gila River south of Guthrie through a canyon south of Guthrie Peak.

However, to make this route passable by wagon would necessitate the construction of a road through the rugged and inhospitable volcanic terrain. With not much more than pick, shovel, and axe, Montes, along with three “compadres” – companions – Victoriano Carrasco, Emilo Lopera, and Andres Serna, set about building a road through a canyon in the Black Hills south of Guthrie Peak. It is not known how long they toiled at this endeavor, what difficulties they encountered, or exactly when they finished as such details are lost to history.

When the “Montez Road” was completed, a watering hole and a toll house had been established at the western terminus. It was called “La Garita”  – the shelter or watchtower. The eastern terminus was at the site of a little known and forgotten train station along the A&NM RR on the south bank of the Gila River with the ubiquitous name of “Coronado”.  In addition to the Montez Road, this route was also known as the Solomonville to Coronado Stage road or simply the Coronado Road.

Montez and his station keepers charged a toll of 10 cents per rider and 50 cents per team. The charge was later dropped to 30 cents per team but maintained the 10-cent-per-rider fee. The stage fare was increased to $3 when proprietors of the stage switched to automobiles in 1910. One of the various duties of the station keeper was to keep an eye out for riders trying to circumvent the toll station and utilized a telescope for this purpose. They would then mount their horses to intercept the offenders and demand their toll fees.

Soon,  stage coach operations, as well as teamsters and individual riders, were utilizing the new route. One could now take a stage from Solomonville to the Coronado Station and make a connection with the A&NM north to Clifton or south to Duncan, Lordsburg, New Mexico, or points beyond.  Travelers heading west could make connections in Solomonville on the GRG&N RR to Globe, or south to Bowie. One also had the option of connecting with the Morenci Southern Railroad in Guthrie to ride the infamous “Corkscrew Railroad” into Morenci. The Morenci Southern Railroad gained this moniker due to its utilization of five loops, four of these constructed out of wooden trestles to gain the necessary elevation from the crossing at The San Francisco River to Morenci. Some people were known to travel great distances just to experience riding this unique and unnerving engineering marvel.

Ownership of the road and the subsequent stage line that serviced it changed hands several times over its relatively short lifespan.  Luther Green was the owner in 1905 and he sold his interests, which included a livery stable, horses, hacks, and the rights to the road, to Ben Clark and Morg Merrill for $6,000.  A legal notice in the May 5, 1905, edition of The Graham Guardian lists the transfer of deed and inventory, which also includes an advertisement promising “Easy Stages, Good Teams and Careful Drivers.”

In March 1906, The Arizona Silver Belt of Globe reported the sale of Morg Merrill’s portion of the business to George B. Gamble.  By mid-1909, Gamble was no longer listed as a proprietor in advertisements, being replaced by Will Clark as manager.

With the division of Greenlee County from Graham County in 1909, both counties annexed the portions of the road within their jurisdictions as a county road. It is interesting to note that the legislation creating Greenlee County also annexed this road indicating its importance to the local economy.

In September 1912, citing decreased usage of the road, the Clark Brothers decided to end regular stage service. Will Clark continued to provide as needed stage service from his livery stable in Solomonville to the Coronado Station.  The road continued to be used until about 1920, when the “Convict Road,” later known as the “Old Safford Road,” and now known as the “Black Hills Scenic Byway” was completed.

The Convict Road as its name implies was constructed utilizing convict labor from 1914 to 1920. It was designed as an auto road to replace the Coronado Road linking the Gila Valley and the Clifton-Morenci Mining District. It followed a steep and narrow path over the western flank of Guthrie Peak. This road was never paved and even when new it was considered a rather adventuresome route. It remains unpaved to this day.

As better roads were constructed between Clifton, Duncan, and the Gila Valley, use of the Old Safford Road  became the primary conveyance of local ranchers tending their livestock.  As late as 1949, my uncle, Raul “Lula” Villarreal, chose to travel to Safford via Duncan when he took my mother Angela Lujan-Nunez there to buy her wedding dress rather than use the Old Safford Road.

My cousin, Rudy Villarreal, remembers that when his family was moving back to Morenci from San Diego after World War II, his mother, Consuelo Colomo-Villarreal, hired a truck and driver to transport their household goods to Morenci. The driver, oblivious to the nature of the Old Safford Road, decided to utilize this path to reach Morenci. When he delivered his cargo he bitterly complained that if he had known the condition of the road he would have never accepted the contract!

In 1950, the Arizona Department of Transportation acknowledged the vision of Francisco Montez with the completion of a portion of U.S. 666 from the Three Way Junction to the Gila Valley.  The highway, now renumbered as U.S 191, parallels the Coronado Road through what is now called “Tollgate Canyon.” Remnants of the old toll road are still evident to this day and  visible to the south of the highway.  The importance of this thoroughfare can only be emphasized by the recently completed improvements to the realignment and widening of the road and replacement of “El Puente,” near Three-Way Junction,with a new and wider bridge.

From horsepower, to steam power, to automobiles and from travel time measured in days to minutes in a time span of 50 years, Montez and his compadres left a proud and lasting legacy though few people remember the original road today.

One can probably be assured that  somewhere in heaven, Francisco, his buddies, and all the people who worked to make the Coronado Road a success, are smiling with satisfaction to the contributions they made to the improvements of transportation and commerce in the region.

William “Bill” Nuñez Jr. lives in York Valley. He was born in Old Morenci in 1958 and lived on AC Hill until 1965 when the Nunez family moved  to East Plantsite that summer. He graduated from Morenci High School in 1976. He served in the U.S. Air Force from 1976 until his retirement from the Wyoming Air National Guard in 2003. His highest rank held was Captain 0-3E and ended his career as an Aeromedical Evacuation Flight Nurse.

He is a veteran of Desert Shield-Storm, Bosnia, Kosovo, and Afghanistan. 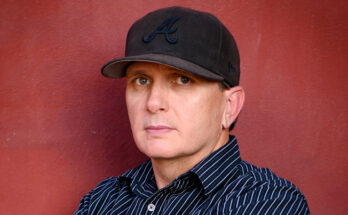