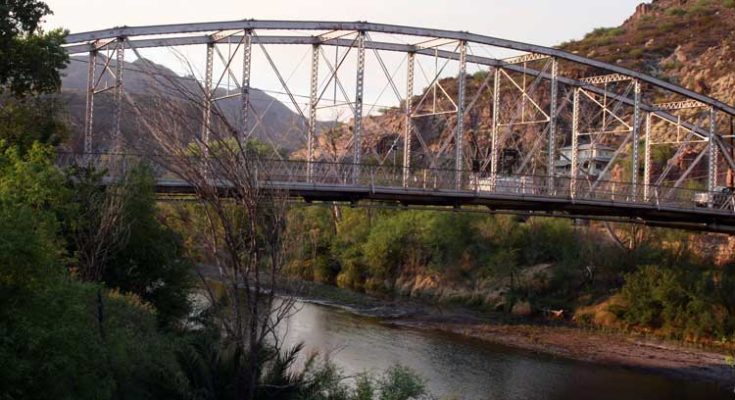 Photo By Walt Mares: The Zorrilla Street Bridge in Clifton spans the San Francisco River. It is 100 years old, built in 1917-18. This fall, it will receive a facelift that will include removing the bridge’s lead-based paint. The project cost is about $1.1 million, with most of the money provided by the Arizona Department of Transportation.

Removal of lead-based paint is the focus of the project

CLIFTON – The bridges of Greenlee County – there are several – are mostly fairly common structures. Not so with the Zorrilla Street Bridge in Clifton, the county seat.

The bridge is 100-years-old this year, and it is about to receive a $1.1 million facelift. The silver paint with which it is coated contains lead, and the project to remove the paint is scheduled for this fall.

The Arizona Department of Transportation is paying for a major chunk of the cost. Part of the project cost will be covered by a Surface Transportation grant being made possible by the Southeastern Arizona Governments Organization (SEAGO). The town’s share amounts to about 5.7 percent of the overall cost.

Over those many years, the bridge, which spans the San Francisco River, has withstood major flooding. It remained standing during the October 1983 flood that devastated Clifton. Not only does the bridge continue to carry traffic crossing the river, it is also a landmark in this historic mining town. Anyone driving through Clifton cannot miss seeing the bridge.It is covered with silver paint which makes it stand out all the more against dark brown canyon walls and the usually bright blue sky.

Beneath the silver is a reddish-brown primer paint, which is also lead-based. Both layers of paint will be removed via the lead mitigation project. The primer is most visible at one end of the bridge. That apparently has been caused by weathering over many years.

There was a similar bridge about a half-mile upstream. It was known locally as “the Black Bridge.” It was wiped out in the 1983 flood. A smaller concrete structure, the Polly Rosenbaum Bridge, was built in 1987 to replace it.

After the flood, the Zorrilla Bridge was closed for about a year as engineers studied its stability. It eventually passed with an A-plus.

The bridge’s style was common in the late-1800s and early-1900s. Being made of iron, the cost of erecting such a bridge today would be prohibitive. That is likely why the Rosenbaum Bridge and the  Coronado Bridge are made of concrete. The present-day Coronado replaced a bridge that was in place for many decades. The new bridge, constructed about a decade ago, is much wider than its predecessor.

It accommodates thousands of vehicles on a daily basis. Most of that is traffic traveling to and from the giant Morenci open-pit copper mine located about five miles from Clifton.

The Coronado was not badly damaged, if at all, during the 1983 flood. What did happen during the flood was the bridge became a dam, primarily because large trees that were uprooted upstream jammed under the bridge. That resulted in floodwaters flowing into South Clifton. The river was running at a record high of 90,000 cubic feet per second. The Frisco is one of the eight fastest running rivers in North America, according to the U.S Geological Survey.

Since then, huge gates have been erected to prevent flood waters from pouring into that part of town. The gates can be closed and secured in the event of a flood threat.

Unlike any of Clifton’s other bridges, or for that matter any other bridge in Greenlee, the Zorrilla structure has roomy pedestrian walkways. They provide quite a view upstream and downstream. The immediate area around the river is heavy with vegetation. It is an ideal place for birdwatching. Many types of the winged creatures can be seen flitting from tree to tree and on to the bridge itself.

It has been about a decade that beavers inhabited the river beneath the Zorrilla Bridge. They were around long enough to begin building small dams. However, they are gone. Those intimately familiar with the river said the beavers simply moved upstream.

The bridge and the street, which at most is a 100-yards long was, at some time during the past decade, named after a prominent family that emigrated from Spain to Clifton early in the 20th Century. The Zorrillas were merchants, ranchers and more.

Gerardo Zorrilla, the family’s patriarch, founded other enterprises in which the family became engaged. That included cutting and selling firewood gathered in the hills. They also ran a “matanza,” which is Spanish for a slaughterhouse. The Zorrillas also raised Angora goats, which was a quite lucrative enterprise during World War II. Angora goat hair, which is very warm, was used for lining coats for pilots and their crews, who while flying at very high altitudes, experienced extreme cold.

Two brothers, Jesus and Manuelo, known as Lolo, ran a general merchandise store on historic Chase Creek for many years. Jesus told of how Angora wool was often stored in caves located behind their store. When an order for the wool was received, the Zorrillas were ready to do business.

The brothers and their sister Isabel Fernandez lived well into their 80s. All have since gone off into the wild blue yonder.