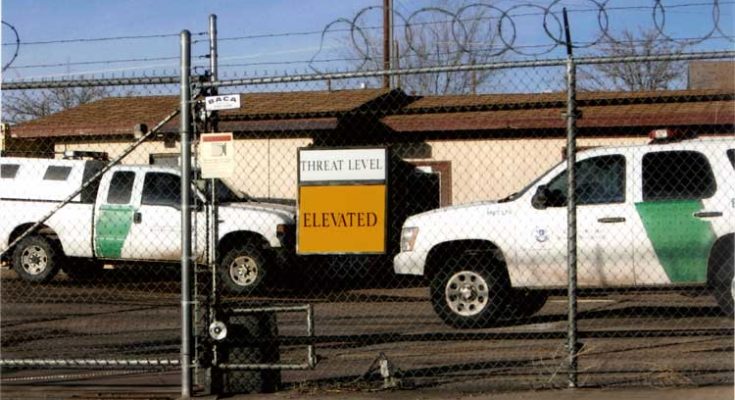 Photo By Dexter K. Oliver: The threat level is indeed elevated, as the Border Patrol signs state, only it could just as easily be describing them.

First, it was the criminal Bundy family of Nevada (if you owe the U.S. government and its taxpayers over a million dollars and refuse to pay you are a criminal) and their motley crew of militiamen and hangers-on protecting illegal free-range cattle from the overly militarized Bureau of Land Management’s (BLM) seizure led by long-time rogue agent Dan Love. Federal prosecutors bungled that trial so badly the judge dismissed the cases against the Bundys “with prejudice” which means it can’t be retried.

Then, it was two of the Bundy boys, Ammon and Ryan, and their own rag-tag band of “patriots” who for a patently bizarre reason took over an obscure federal bird sanctuary in rural Oregon. That led to the destruction of property worth millions of dollars, bloodshed, and one violent death. All of this was compounded by FBI agent Joseph Asarita firing his service weapon toward the vehicle driven by one of the “patriots”, LaVoy Finicum, and then lying about it under oath. His bullets didn’t hit anyone; Finicum was killed by an Oregon state policeman.

Greenlee County then had Forest Service (FS) employees Carol Telles, Allen Graves, and Tyler McCafferty of the Clifton Ranger Station being responsible for the agonizing deaths by dehydration of two service horses and one mule. The FS did an internal investigation and they were given slaps on the wrist. The Greenlee County Sheriff’s Department and Greenlee County Attorney’s office finally got Graves and McCafferty into court on nine charges of animal cruelty each. Jeremy Ford, the County Attorney, in a bizarre move of his own, subsequently dismissed their cases from the county court. He did so ignoring the blatantly false statements provided in court documents by one defendant’s lawyer, Sean Chapman. Remember that name; it’s about to crop up again.

In 2012, Border Patrol (BP) Agent, Lonnie Swartz, shot at 16-year-old José Antonio Elena Rodriguez through the narrow gaps in the border fence in Nogales, Arizona and into Nogales, Mexico. He fired 16 times and hit the boy 10 times in the back, including in the back of the head. Swartz was later charged with second-degree murder. His legal team, led by Tucson lawyer Sean Chapman, who has still not answered for lying in writing to get his client out of Greenlee District Court, kept postponing the trial until this March. It recently concluded with the jury acquitting Swartz of the murder charge and being unable to agree on the lesser charges of either voluntary or involuntary manslaughter. The judge declared it a mistrial.

American justice, or what is supposed to pass for it in our nation’s contentious atmosphere, has been hammered from both sides. It’s getting harder to tell the good guys from the bad. Many of the truly terrible ones have worn federal uniforms, badges, and side arms. Dan Love was fired from the BLM for misdeeds and coercion of others, although that action was too long in coming. That gun-happy agency will surely find someone else to fill his boots.

Lonnie Swartz should never have been a BP agent at all. He had joined the military in 1995, gone AWOL two months later, been arrested in 1997, and discharged four months after that. He didn’t bother mentioning any of this when applying for the federal law enforcement officer (LEO) position. That lie by omission should have kept him from being able to shoot a kid in the back with a government-issued weapon in the first place. Attorney Sean Chapman made sure that information was not allowed in court during the trial. The local Tucson BP union president, Art del Cueto, who must have been well aware of this discrepancy, stated that he thought “justice was served” after the acquittal on the second-degree murder charge.

The BP has a long, tiresome history of taking bribes, shootings, killings, drug smuggling, people smuggling, and other criminal actions that are often hushed up. The impenetrable bubble of the “green brotherhood” has once again shown a united front against the very public they are supposedly working for and protecting. But they are not alone in blame.

Take the federal prosecutors for the Las Vegas, Nevada Bundy trial, who were so arrogant and self-assured they didn’t think their own misdeeds like not sharing evidence with the defense counsel was important. When they lost the slam-dunk case they should have been fired, but they weren’t worried about that, it’s hard to fire a federal employee. They failed the people of the United States with their brazen hubris and got away with it just as the Bundys got away with their shenanigans. Nobody won, which is a scenario that is becoming more commonplace.

The federal prosecutors in the Oregon wildlife refuge takeover somehow bungled another easy win, with the defendants providing their own incriminating video, audio, and other evidence. But the jury acquitted them pretty much because they disliked the snooty federal attorneys, not because the evidence wasn’t overwhelming. Echoes from the OJ Simpson trial and Mark Furhman testimony could be heard playing in the background.

Since I know from my personal investigations and seeing written proof that attorney Sean Chapman is not above playing loose with the law, I have to wonder what kind of chicanery he pulled in this trial. Since he has been a federal prosecutor himself, he knows well how to game the system, which is why he gets what the Greenlee County attorney stated, with admiration in his voice, “the big bucks”. If this is what now is being called “justice”, the dictionaries better start changing their definitions.

There was one shot at cleaning up the corrupt and deadly system that permeates the BP agency. Mark Morgan was moved over from the FBI to head the BP in late 2016. He was picked under the Obama administration specifically to address and correct these criminal problems. He only lasted a few months before Donald Trump fired him just days into the new presidential cycle. That was it folks; BP hasn’t cleaned up its act since it was started in 1924 and without outside regulating, it never will.

I worked on the border with Mexico for a lot of years but I don’t like going down there anymore. Whenever I see a BP agent I realize in the back of my mind that this person has the power to kill me and get away with it, for whatever reason, or no reason. I’ve seen the trail camera photos of them hunting me, locked and loaded and ready to shoot. I’ve had to dodge drug smugglers and illegal aliens of every stripe heading north but the only time I came close to being shot was by a BP agent. It doesn’t give me a warm and fuzzy feeling when I see the green uniform on anyone. And I know we haven’t seen the end of criminal shootings by BP agents.

Dexter K. Oliver is a freelance writer and wildlife consultant who has dealt personally with Border Patrol agents for over four decades.