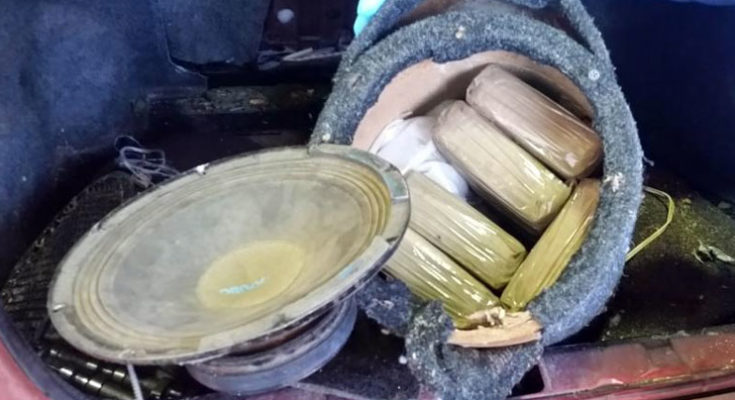 Contributed Photo/Courtesy U.S. Customs and Border Protection: Officers uncovered 38 pounds of cocaine in the back seat and speaker box of a smuggling vehicle.

NOGALES – U.S. Customs and Border Protection, Office of Field Operations, officers arrested five Mexican nationals and one U.S. citizen for alleged attempts to smuggle 138 pounds of cocaine, heroin, and methamphetamine through Arizona’s Port of Nogales over the weekend.

Officers at the Dennis DeConcini Crossing referred a 27-year-old Mexican male for additional inspection of his GMC truck, as he attempted to enter the U.S. through the port Friday morning. After a CBP narcotics detection canine alerted to the presence of a scent it is trained to detect, the search of the vehicle led to the discovery of modifications to the engine where five packages of heroin were hidden. There were an additional three packages of cocaine also seized. The nearly five pounds of heroin is worth almost $56,000, while more than seven pounds of cocaine is worth nearly $102,000.

A short time earlier that morning, officers at the Mariposa Crossing referred a 41-year-old Mexican male for an additional search of his Dodge truck as he attempted to enter the U.S. After a CBP canine alerted to the presence of drugs, a search led to the discovery of 64 pounds of cocaine hidden inside the truck’s back seat. The cocaine is worth more than $871,000.

That evening, officers at the DeConcini pedestrian lanes selected a 59-year-old Tucson man for additional questioning as he attempted to enter the U.S. through the port. A positive alert by a CBP canine led to the removal of three packages of drugs from inside of his guitar. They were identified as just more than three pounds of meth, worth nearly $3,000.

Saturday afternoon, officers at the Dennis DeConcini Crossing referred a 33-year-old Mexican female for an additional search of her Nissan sedan. The search led to the discovery of nearly 38 pounds of cocaine from the backseat and speaker box, worth more than $516,000.

Early Sunday morning, officers at the Mariposa Crossing searched a Pontiac sedan belonging to a 33-year-old Mexican male, as he attempted to enter the U.S. from Mexico. A canine alert led to the discovery of three packages of heroin inside of the vehicle’s spare tire. The drugs, which weighed more than seven pounds, worth more than $84,000.

And at about the same time, Mariposa Crossing officers referred a 29-year-old Mexican male and his 27-year-old Mexican female passenger, for a further search of his Ford compact sedan. A positive alert by a CBP canine led to the discovery of a dozen drug packages that were hidden inside of the spare tire. They were determined to be more than 13 pounds of meth, worth more than $12,000.

Officers seized the drugs and vehicles, while the subjects were all arrested and then turned over to U.S. Immigration and Customs Enforcement’s Homeland Security Investigations.