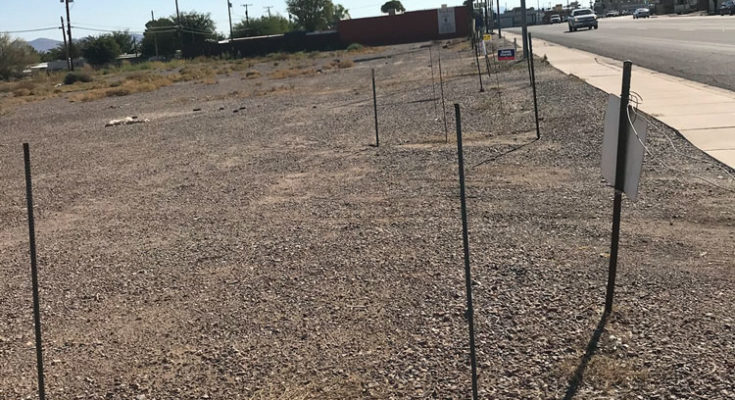 Contributed Photo/Courtesy John Rhodes: Campaign signs were reported stolen from this site across from the Graham County General Services Building and from the Thatcher Park area.

On Tuesday morning, Graham County Republican Party Chairman John Duane Rhodes filed a report with the Safford Police Department after noticing the large Republican signs he posted on his property along U.S. Highway 70 across from the Graham County General Services Building were missing. Rhodes told the Gila Herald that whoever took the signs must have had tin snips or something like that because they were wired well to the rebar posts. The only evidence left at the scene was a shoe print in the dirt and a tall-boy beer can.

The next morning, Rhodes filed a police report with the Thatcher Police Department after more Republican signs were taken, this time from the area of Thatcher Park. The area also had Democrat signs taken as well.

Rhodes estimated the signs taken from his property to be worth roughly $800 and that the combined worth of the signs taken from the Thatcher property between the Republican ones and the Democrat ones could be roughly $1,200. If those numbers hold true, anyone who is apprehended in the theft could face a Class-5 felony. Theft of an item or items worth $2,000 to $3,000 is a Class-5 Felony, while theft of items worth between $1,000 and $2,000 is a Class-6 Felony, according to Arizona Revised Statutes 13-1802.

Rhodes said he is determined to replace his signs to assist in his party’s election this November. Anyone with information regarding who may have taken the signs is encouraged to call either the Safford Police Department at 432-4100 or the Thatcher Police Department at 428-2296 or use the anonymous tip line and text “GRAHAMTIP” to 79516 and type in a message. Messages are sent to the Graham County Dispatch operators anonymously, so they have no way of knowing who sent it.

Update 9-20-18: According to Rhodes, the man who took the signs turned them into the police after reading this article. Rhodes said the man thought the election was over and was going to utilize the signs for another purpose and didn’t realize he wasn’t allowed to do that.

Since the man apologized and returned the signs, Rhodes and the police declined to press charges.