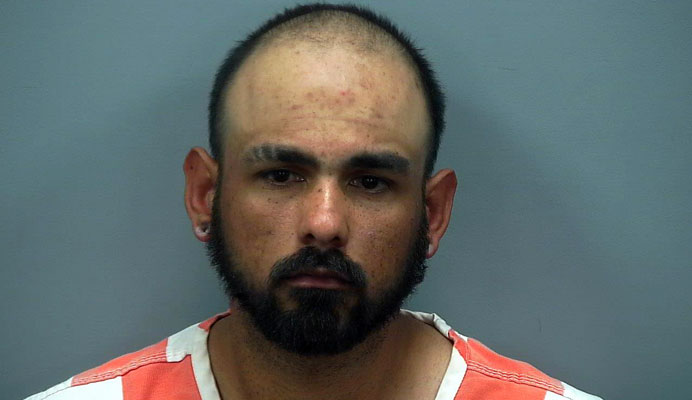 Contributed Photo/Courtesy GCSO: Cedric Arrellin was arrested and booked into jail on warrants and drug charges after failing to flee from police.

SAFFORD – A man already wanted for violations including burglary, theft, DUI, and drug charges has now been given additional drug charges after being caught with meth and fentanyl.

Cedric Raymond Arrellin, 23, of Safford, was wanted on a $20,000 bond out of Safford Justice Court regarding charges of burglary in the third degree, theft, and criminal damage.

He was also wanted on a warrant from the Graham County Superior Court regarding charges of aggravated DUI, possession of a dangerous drug, and possession of drug paraphernalia.

According to a Safford Police report, an officer was on patrol on May 17 looking for Arrellin and his girlfriend, Makellia Jackson, 24, of Safford, regarding an unrelated theft of rings and a debit card when he noticed Arrellin near a car at a storage facility.

The officer reported that Arrellin fled when he approached but did not get far. Arrellin ran to the back of the storage facility, which was surrounded by a fence. He was then taken into custody.

During a search of Arrellin, the officer located six blue, counterfeit oxycodone pills laced with fentanyl, and a baggie with methamphetamine.

While walking back to the front, the officer came upon Jackson and received permission to search her car for the missing items. An additional baggie of meth was located in Jackson’s car in a pink wallet, and Jackson was arrested and booked into jail as well.

Jackson was later released, however, and a long-form complaint was filed against her on May 25 regarding charges of possession of a dangerous drug and possession of drug paraphernalia. A warrant for her arrest was then issued with a bond amount set at $5,000.