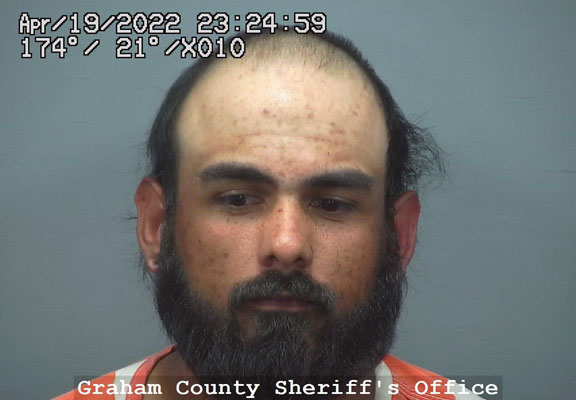 Contributed Photo/Courtesy GCSO: Cedric Arrellin, 23, has been charged with burglary, theft, and criminal damage in connection with breaking into the washing vending machines at the Economy Inn.

SAFFORD – A man who allegedly stole change out of a motel’s vending machines is facing felony charges and stiff fines and fees, including restitution.

Cedric Raymond Arrellin, 23, of Safford, was fingered as the suspect after the inn’s cleaning service located metal pieces in his room.

According to a Safford Police report, a manager for the Economy Inn at 225 E. U.S. Highway 70 reported damage to the inn’s washer and dryer coin machines on April 18. The machines showed damage from having the locks drilled and broken into. The manager advised it would cost about $300 to replace the coin machines.

The manager also informed the officer that Arrellin was seen on the inn’s surveillance cameras entering and exiting the washroom without any clothes on multiple occasions.

Arrellin and the female subject he had been staying at the inn with had left prior to the officer arriving but the couple was later pulled over in a traffic stop the following day. At that time, Arrellin allegedly admitted to damaging the machines and stealing the coins. Arrellin later told a Safford officer that he had taken about $38 from the coin machines.

After a review by the Graham County Attorney’s Office, Arrellin was charged with burglary in the third degree, theft, and criminal damage. In addition to the inn case, a rash of vending machine break-ins has been reported in Safford and Thatcher. Arrellin has not been charged in connection with those other break-ins.

However, a non-related long-form complaint was previously filed against Arrellin on April 25 regarding charges of possession of a dangerous drug and drug paraphernalia. The charges, in that case, have been bound over to Graham County Superior Court. Arrellin was also wanted on a $500 bond regarding failure to appear regarding a late 2021 guilty conviction for disorderly conduct.

Editor’s note: An earlier version of this article had an incorrect booking picture of another inmate. The mistake was the result of a mislabeled photograph.