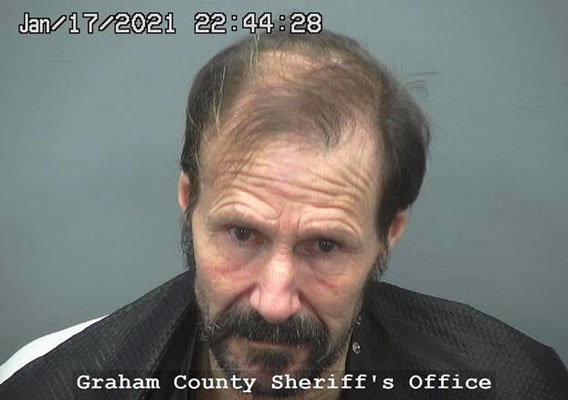 Contributed Photo/Courtesy GCSO: Jason Mills, 58, was jailed for burglary and theft of a firearm after allegedly stealing the gun from a vehicle parked at the hospital.

SAFFORD – A man who drove his friend to the Emergency Room ended up in jail Friday after deciding to burglarize a vehicle in the parking lot and steal a handgun.

Jason Talbert Mills, 58, of Thatcher, was arrested and booked into the Graham County Adult Detention Facility on charges of burglary and theft of a firearm.

According to a Safford Police report, an officer was dispatched at about 12:30 p.m. to the Mt. Graham Regional Medical Center (MGRMC) for the burglary incident. Upon arrival, the victim advised that she had gone to the hospital because she wasn’t feeling well and when she returned to her vehicle in the parking lot she noticed it had been burglarized and she was missing her black Taurus G2C 9mm handgun. The victim advised the gun was loaded with a full magazine and had a round in the chamber.

Upon viewing the hospital’s surveillance footage, the officer reported seeing a man who had been in the ER waiting room with a juvenile leave the hospital and head out to the parking lot. The footage shows a man identified as Mills enter the victim’s Ford Expedition and rummage around for 12 minutes. Mills then returned to the waiting room only to then go back to the Expedition.

A short while later, a white truck drove into the parking lot, and Mills and the juvenile greeted the driver. Mills is then seen on surveillance footage entering the victim’s SUV for the third time. He then left the SUV and began to return to the truck but dropped the gun he allegedly took from the SUV on the ground. He then retrieved the gun – all within eyesight of the truck’s driver – and got into the white truck and the group left the area.

After identifying Mills, officers located the white truck just as it was leaving Mills’ residence. The truck was then pulled over by the officer, with assistance from the Graham County Sheriff’s Office and Arizona Department of Public Safety.

Upon contact, Mills had the stolen gun in his hand and placed it on the truck’s back bumper. The gun was later found to be missing its magazine and bullets.

Mills allegedly told the investigating officer that the patient he was with at the hospital had told him to get some stuff out of his vehicle and he thought the SUV he took the gun from was his friend’s vehicle. However, the officer asked Mills if he had driven his friend to the hospital in his friend’s vehicle and Mills said he had. In his report, the officer noted that while Mills’ friend has a Toyota Sequoia which is similar in color and size to the victim’s SUV, the Sequoia has a completely busted-out back window and different interior.

While Mills claimed it was “purely an accident”, the driver of the white truck said Mills told him he was going to take the gun from the SUV and that Mills knew it wasn’t his friend’s vehicle.

Mills was then arrested and booked into jail for burglary and theft of a firearm.