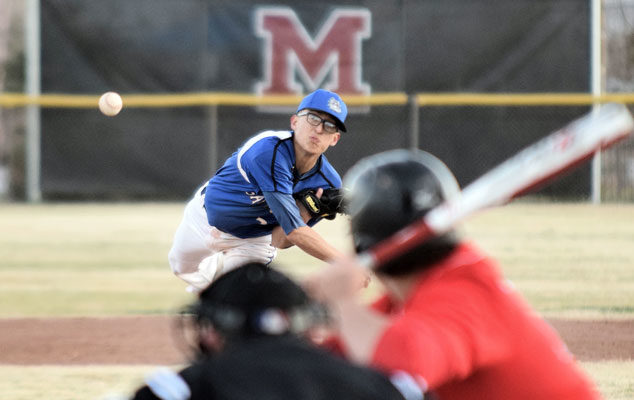 MORENCI – The temperature was slightly warmer than the day before as the baseball season opener for Morenci and Safford commenced Feb. 20. Safford left Francis Waldorf Stadium with a 5-1 season-opening win over host Morenci.

The Robert Abalos-coached Bulldogs scored in the first, second, third, and fifth innings, while limiting Morenci to a lone run in the sixth.

Walked leadoff senior batter Patrick Ornelas was tripled in by junior Keegan McKinney with one out in the first, a two-out walked Ornelas crossed the plate following a bases loaded walk to junior Mason Duros in the second, a singled junior Justin Torrio and doubled sophomore Noah Bevens were driven in on an Ornelas two-out grounder error at short in the third, and a tripled Higgins was singled in by Torrios with two outs in the fifth.

Morenci junior Brandon Blair tripled on to start the sixth and was driven in on a Maddux Martinez sacrifice fly. The Wildcats went three up and three down to end the game.

The home team also went three up and three down in the third and fourth, while the Bulldogs did that in the fourth and sixth.

Ornelas struck out seven, walked two, beaned one, and scattered three hits while facing 24 batters during six innings. McKinney struck out the three batters faced during one inning of relief.