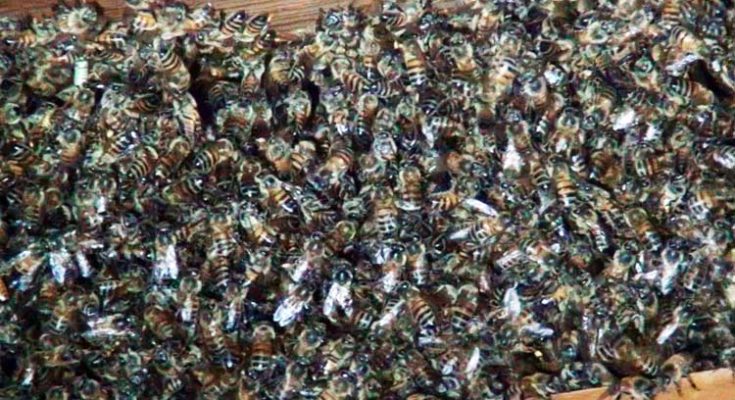 Jon Johnson Photo/Gila Herald: Africanized bees from this hive located at a residence south of Safford killed a family’s dog Sunday. The hive was eradicated Monday by Rattlesnake Exterminating.

GRAHAM COUNTY – A family south of Safford near Roper Lake saw firsthand the devastation a hive of Africanized “Killer” bees can do Sunday after their dog was killed by a swarm.

A brother and sister also suffered stings, with the man suffering sings to his face and hands, and the woman reporting stings to her head, arms, and back. Both adults were examined by paramedics from Lifeline Ambulance.

The Safford Fire Department arrived at the scene and foamed the bees but the dog, which apparently initiated the attack, expired due to bee stings.

There was another adult and six juveniles in the residence, but they were evacuated safely and none suffered any bee stings.

The beehive was located inside the enclosed porch of the residence and had apparently been there for years.

“The hive was big, really big,” Safford Fire Chief Clark Bingham said. “They had been there a long time inside the wall of the house.”

Bingham said the homeowner had attempted to seal the bees in with foam to no avail.

Enter Rattlesnake Exterminating, which assessed the problem Monday morning and then returned to eradicate the bees and hive Monday night when all the bees were back at the hive and docile.

Owner and operator Mark Curley said while bees are important in nature and when possible his company prefers to use smoke and a vacuum to capture the bees (which also allows for the capture of their honey) and relocate them, in this case, the Africanized bees were in a location where it was necessary to poison them and eradicate the hive.

“When they (Africanized bees) go off they go off and it happened yesterday,” Curley said. “They went off and they killed the dog. So, we went in and killed the hive off. There’s no way to save these bees.”

After poisoning the bees, Curley and his crew began the arduous task of removing the hive from inside the ceiling. They said it was important to fully remove the hive or it would serve as a calling card for other bees to move into the space.

Curley and Bingham described the bees as being very aggressive. Bingham previously suffered numerous stings himself while rescuing then 11-year-old Andrew Kunz from a deadly bee attack in February 2017 in which Kunz was stung more than 400 times.

“Bees are common in nature,” Bingham said. “We need them to pollinate the plants, but when they are living in your house you need to have them removed. If you see the bees out in the wild, stay away from them. Bees tend to move on unless there is a hive.”