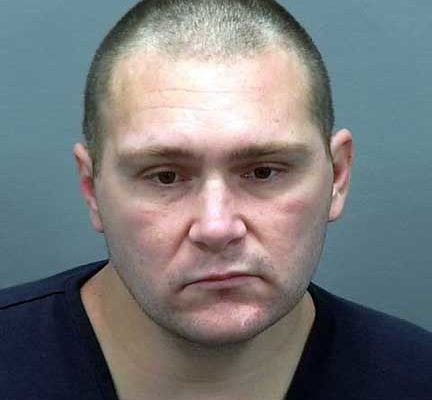 Contributed Photo/Courtesy GCSO: Robert Lee Lafler took a plea agreement and was sentenced to seven years in prison for his role in the shooting of Gary Hess in December 2017.

SAFFORD – Robert Lee Lafler, 35, of Thatcher, was sentenced to seven years in prison to be followed up by four years of probation upon his release for his involvement in the Dec. 18, 2017 shooting of Gary Don Hess, 48.

According to police reports, Lafler was with Manuel Ramon Campos, 36, of Safford, as they approached a residence in the 900 block of State Route 366 (Swift Trail) with a handgun and a shotgun. Surveillance footage at the residence allegedly shows Campos firing the shotgun through the door, striking Hess in his neck with buckshot.

Lafler and Campos evaded officers that night but were not on the lam for long.

Lafler was captured Dec. 19, 2017, at an apartment complex in Safford, and Campos was arrested at his mother’s residence Dec. 21, 2017. Campos posted a $25,000 bond and was released from jail but was taken back into custody in April after being charged with possession of marijuana and drug paraphernalia.

Campos’ case appears to be heading for a trial. His next hearing is scheduled for May 1.

On Thursday, April 12, Lafler signed a plea agreement admitting to misconduct involving weapons – a Class 4 Felony – and an amended charge of discharging a firearm at a residential structure – a Class-2 Felony.

Due to his prior conviction of resisting arrest in September  2016, Lafler’s plea agreement stipulated he be sentenced to seven years in prison on the misconduct involving weapons charge. Additionally, the plea agreement also stipulated he serve four years of standard supervised probation upon his release from prison for the discharging a firearm at a residential structure charge. Lafler was then sentenced the same day as his change of plea due to the sentence being stipulated.