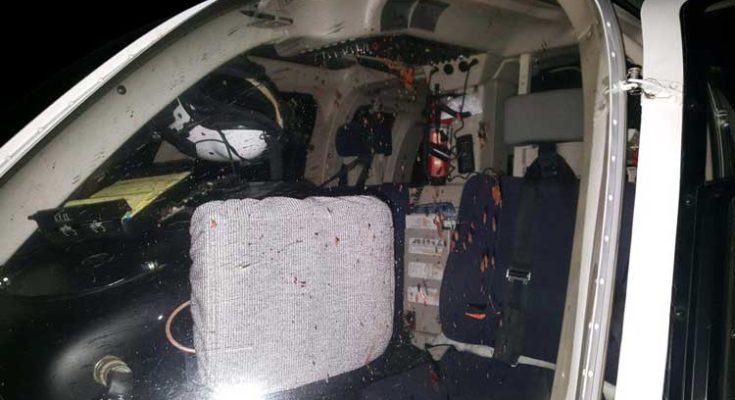 Contributed Photo/Courtesy DPS: The helicopter had to perform an emergency landing after being struck by multiple birds.

Northern Arizona — On April 29, at 12:51 a.m., an Arizona Department of Public Safety (AZDPS) helicopter, Ranger 56, was flying back to the Western Air Rescue base in Kingman after an unsuccessful search for a 4-year-old girl north of Williams. During the return flight to base in Kingman, Ranger 56 struck a group of birds.

Pilot John Haverly and trooper/paramedic Daniel Townsend described what happened next, “The flight was suddenly interrupted with a serious of loud, cannon like thuds, followed by a sudden rush of air into the cockpit.” Both crew members described being blasted by 100+ mph wind, debris, bird blood and their remains which temporarily blinded Townsend.

Moments prior to the impacts, Townsend, who was traveling in the front left seat, observed what appeared to be a group of birds flying from the left side directly into the path of Ranger 56. There was no time to warn the pilot who did not see the birds.

Although Ranger 56 received damage and the crew was battling with debris and high-speed wind blast, they successfully landed in an open field near Interstate 40 where they contacted the Department’s Flagstaff Operations Communications center and asked for help.

The crew did not sustain injury.

An initial inspection of Ranger 56 indicated one of the birds had broken through the left front chin bubble of the aircraft, which is what allowed the sudden rush of air into the cockpit.

The next day, Ranger 56 was repaired for a flight to Phoenix where a thorough inspection and repairs could be performed

Lt. Colonel Ken Hunter, of the Agency Support Division, said, “This very brave and highly skilled crew was just returning from a search and rescue mission involving a missing 4-year-old girl. Pilot Haverly’s wit and training are the reason he was able to land the helicopter safely and without further incident.”