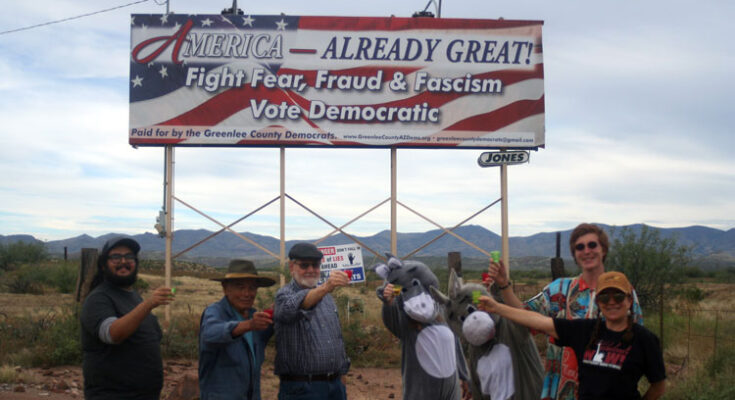 Contributed Photo: Members of the Greenlee County and Graham County Democratic parties toast the recent erection of a billboard emphasizing that America is already great. The billboard is located near 3-Way on U.S. 191.

3-WAY – The immediate surrounding landscape is large rocks, big enough to sit on, scrub brush, creosote bushes, and small rocks embedded in the dirt. The site is near 3-Way, a heavily traveled intersection where three ways meet.

Not much of a scene for a celebration, eh? It was certainly grand enough for a celebration by a group of local folks from the Greenlee and Graham County Democratic parties.  They even drank a toast, some champagne, and soda pop.

The small celebration was the erection of a large billboard that reads “America – already great.” It is a response to an assertion by a former U.S. president to Make America Great Again.

The Democrats’ billboard states it bluntly that America is already great and any assertion that is not already great is a falsehood. “It’s too bad many people have bought into the bull and baloney that America is not great,” said Greenlee Democrats Chair Susan Breen. ‘This is the greatest country in the world and the freedoms we enjoy are greater than in any other nation in the world.”

Breen said she was pleased with the billboard’s message, which she described as both ‘positive yet including a warning for voters in this turbulent election season.

She further pointed out that there are several propositions on Tuesday’s General Election ballot which voters should make informed decisions about. The Clean Elections Commission has sent out a pamphlet on both the candidates and propositions to every eligible voter.

If returning an early ballot, it is recommended that they be dropped off at a ballot box at the Greenlee Courthouse or inside the Courthouse rather than by mail at this date. Voters are also able to vote early at the County Courthouse in Clifton through Friday, Nov. 4. On election day, Nov. 8, voters can also vote in person at one of three Vote Centers in Greenlee: the county office building just west of the Duncan Fairgrounds on Fairgrounds Road; the Clifton Train Station, or the Morenci Club.

Any registered county resident is eligible to vote at any of the three locations. There will also be polling locations in Eagle Creek and Blue specifically for registered residents of those precincts.

A current driver’s license or equivalent ID is required to vote in person. To learn what else is accepted as valid ID, voters may call the Greenlee County recorder’s office at 928-865-1717.

Early ballots can be turned in on election day at any of the polling locations and those returning early ballots do not have to stand in line.

The polls will be open from 6 a.m. until 7 p.m. on Nov. 8. If a voter has lost their early ballot or prefers to vote in person, they may vote with a provisional ballot on election day unless they bring the mailed ballot with them as proof that they have not yet voted.

Breen said, “The freedom to vote as a person wishes to is one of our greatest freedoms. Unfortunately, there are those who believe The Big Lie that elections are somehow rigged and don’t seem to realize what they are doing is undermining Democracy and that is what America’s greatness is all about.”

She added, “Thank God we already have the greatest Democracy the world has ever known. It’s up to us to keep it that way.”

Breen urged Greenlee residents to vote, saying the Nov. 8 General Election, “Is one of the most critical elections Americans have faced in a very long time. Will Democracy, as we know it, survive?”