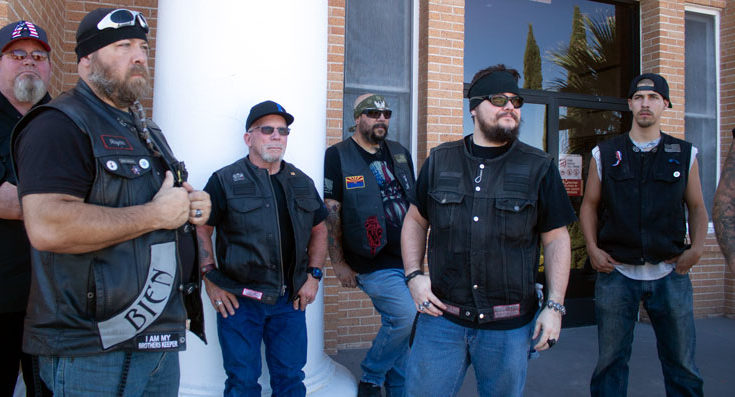 Change of plea set after an apparent successful settlement conference

SAFFORD – The unmistakable deep rumbling of Harley Davidson motorcycles could be heard throughout the courthouse on Wednesday as a group of bikers came together in solidarity for a molestation victim.

The Unbroken Motorcycle Club out of Phoenix rode up to Safford on Wednesday and joined with the Wild Bunch motorcycle riders of Safford and others to show their support for the abused child in the molestation case against Chris James Chacon.

The Unbroken MC is a trade name of its nonprofit 501(c)(3) organization, Protect the Children Inc. In the program, the bikers provide security anytime a child feels unsafe, escorts the family to court and back home, promotes community awareness and even helps with therapy costs and other essentials, such as school supplies.

Club Vice-President “Tek” spoke with the Gila Herald at the courthouse.

“We help abused kids and their families,” Tek said. “Obviously, we concentrate on the child. We’re there for the child. We show the child that there are people and adults in this world (who) are there to believe them; (who) are there to comfort them and to be there on their side. There’s a lot of abuse that happens. It fractures families and their family becomes a lot smaller because of that but then we bring our family and now they usually have a much larger family. And so, we’re here to stand for that child, to be a wall between them and their abuser. We’re there to empower them so that they can tell their story and so that they can stand up as the true hero. We’re just sidekicks, that’s it.”

The settlement conference appeared to be a success, as a change-of-plea hearing has been scheduled for later this month. While the details of the proposed plea have yet to be made public, Chacon is facing the possibility of multiple decades behind bars.

“We’re just here for the child,” Tek said. “Whatever the verdict is one way or another, we’re just here to help the child and family . . . Sometimes the other side will try to intimidate the child. If it happened the way the child said it did they’ve already been exerting their power. So, now the child has bigger and scarier friends than they do.”