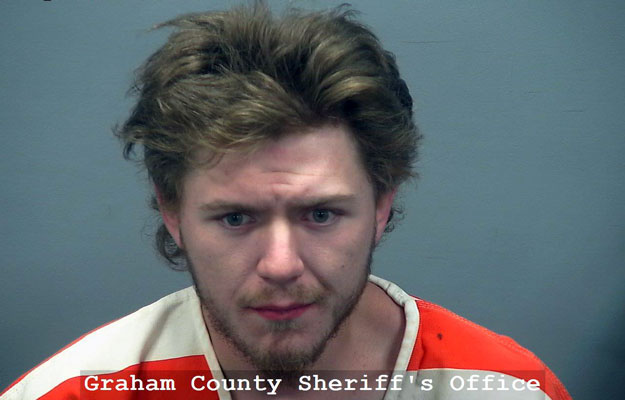 Damien Allen Sparks, 20, of Safford, plead guilty May 25 to possession of drug paraphernalia, and resisting arrest – both Class-6 felonies and theft – a Class-1 misdemeanor. He is scheduled to be sentenced on June 21.

SAFFORD – A man who reportedly stole a bicycle and then attempted to resist arrest recently took a plea and is scheduled to be sentenced to probation.

Damien Allen Sparks, 20, of Safford, plead guilty May 25 in Early Disposition Court (EDC) to possession of drug paraphernalia, and resisting arrest – both Class-6 felonies and theft – a Class-1 misdemeanor. The plea agreement dismissed the first count in his charging document – possession of a narcotic drug. While Sparks was also initially booked on a charge of aggravated assault on a police officer as well, the Graham County Attorney’s Office declined to charge that in this case.

Sparks was initially arrested on May 20 after an officer spoke to a resident who informed him of the theft of her son’s bicycle and showed surveillance video. The officer recognized Sparks from the video and went to his residence to speak to him about it.

The officer located Sparks at his residence, and after the officer told Sparks he was in the surveillance video stealing the bicycle Sparks attempted to retreat into his residence.

The officer reported he ordered Sparks to stop and threatened him with his department-issued TASER. When Sparks continued to resist being taken into custody, the officer reported using his Oleoresin Capsicum (OC pepper spray) and said Sparks attempted to deflect the spray with his cowboy hat but that he had gotten him in the face.

Sparks continued to flee, however, and jumped off the porch into a neighbor’s yard and then ran off eastbound down 9th Street to 1st Avenue. Around that point, another Safford officer pulled his patrol vehicle ahead of Sparks, and the initial officer approached from behind. Sparks still refused to comply with the officers’ commands, according to the report, and the officer tackled him to the ground and placed him into handcuffs.

Sparks was then transported to the Graham County Adult Detention Facility to be booked, however, while going through the intake process, jail staff located seven blue, likely counterfeit oxycodone pills laced with fentanyl. Charges of possession of a narcotic drug and possession of drug paraphernalia were then added to his booking jacket along with resisting arrest and theft.

According to the plea, Sparks will be placed on supervised probation for each count with the duration up to the judge. Additionally, the judge could order up to one year of incarceration in jail.

Sparks will also have to pay a $500 cost of prosecution fee and whatever restitution is required for the bike theft. Sentencing is set for Tuesday, May 21, at 9:30 a.m.