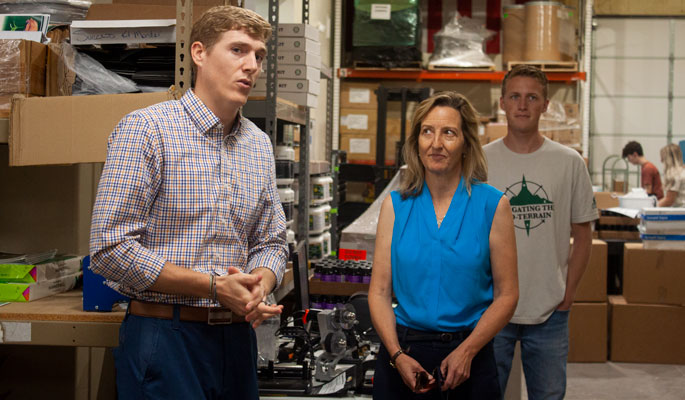 Jon Johnson Photo/Gila Herald: From left, OHS Vice President Dallin Ferrin shows congressional candidate Kirsten Engel the ropes of the organic vitamins and supplements provider’s base of operations in Pima. In the back, OHS intern Andrew Knecht takes in the scene. Engel went on an economic tour of Graham County on Wednesday. She is hoping to become the representative for the newly formed Congressional District 6, which includes all of Graham and Greenlee counties excluding reservation land.

PIMA – Come November, Graham County will have a new face in the House of Representatives and former State Senator Kirsten H. Engel would like it to be hers.

Engel was in Graham County on Wednesday, for an economic tour of the Gila Valley. Graham County Democratic Party Chairman Nick Nordgran-Tellez and Graham County Chamber of Commerce Executive Director Vance Bryce guided Engel’s tour, with her first stop being at Eastern Arizona College, one of the largest employers in Thatcher.

She then had a tour of the Optimal Health Centre building in Pima, which houses Optimal Health Systems (OHS) and Gains In Bulk, and is the largest private employer in Pima. The company is currently working on completing an addition that nearly doubles its building’s size.

Engel finished her visit with a stop at Mi Casa Tortilla Factory in Safford.

The county will get a new representative no matter what due to the state’s redistricting, which will move Graham County’s current representative, Tom O’Halleran (D-AZ-01), into Congressional District 2. At the same time, Graham County will now be part of Congressional District 6 (formerly CD2), which encompasses Graham and Greenlee counties (excluding reservation land), most of Cochise County, into Tucson in Pima County, and up into Casa Grande in Pinal County (basically the southeast chunk of the state). Its current representative, Ann Kirkpatrick (D-AZ-02), has declined to run for re-election.

Engel is the Charles E. Ares Professor of Law at the James E. Rogers College of Law at the University of Arizona, where she teaches and researches areas of environmental and administrative law. For more information on Engel visit her campaign website here.

She served in the Arizona State Senate in LD-10 and resigned on Sept. 8, 2021, to run for United States Congress.

Engel is looking for the Democratic nomination. Other candidates include Avery Anderson and Daniel Hernandez.