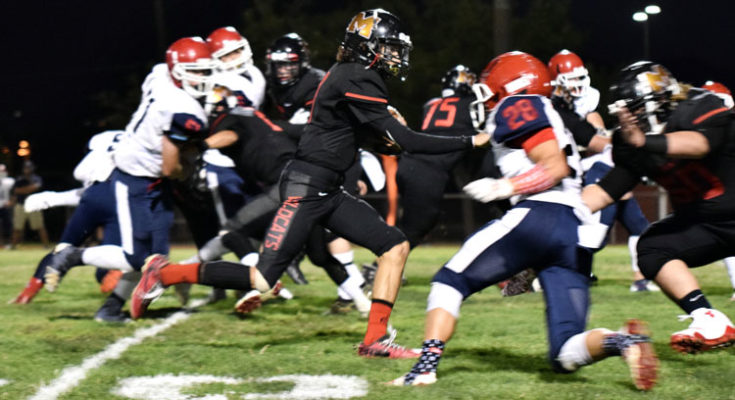 MORENCI – The Morenci Wildcats (1-1) home opener started out great as the defense forced a turnover on the Benson Bobcats’ (2-0) first play from scrimmage and the offense marched down for the game’s first score. It was pretty much all downhill after that, however, as Benson railed off 49 unanswered points and tamed the Wildcats, 49-7.

First-year Morenci head coach Joseph Garcia told his players after the game that they didn’t bring the same enthusiasm in the second half, which led to their downfall.

The perceived lack of intensity, coupled with the inability to move the ball on the ground, a nonexistent passing game in which quarterback Brandon Blair had almost as many interceptions as passing yards, holes in the defensive line one could drive a mine haul truck through, and multiple turnovers, including three on downs, certainly had an effect on the game.

With that said, from high up in the stands, it looked like Morenci never gave up and continued fighting until the horn sounded, even though a comeback late in the fourth was impossible.

On the other side, Benson’s 15-year head coach Chris Determan said his team showed poise in the victory.

“We came out a little bit slow at the start and then we kind of figured out what we had to do and then we just started rolling,” Determan said. “We ran the ball well (and) we threw the ball when we wanted to. It was kind of nice to come out and see the kids play really well after that initial quarter.”

On Benson’s first play from scrimmage, Dondre Villalobos peeled off a nice, long run, but Morenci’s Paul Daniel Moreno caught him from behind and knocked the ball out of Villalobos’ hands. Angel Arrellin scooped up the ball for the Wildcats for the game’s first turnover. Benson would have fumble issues throughout the game, giving up the ball on at least two other occasions.

Morenci took advantage of the turnover and marched the ball down the field behind good running, including a quarterback keeper by Blair that set the Wildcats up at the 5-yard line. Carlos Bray finished it from there as he scampered around the right side and Morenci was up 7-0 early in the first. Unfortunately, it would be the last time the Wildcats would sniff the end zone all night.

The defensive play seemed to rile up the Bobcats, who came back with their third possession and looked to be in great position to tie the game after working the ball down the field by taking off chunks of yardage behind big runs from Carson Barney and Villalobos.

However, on a 1st down and goal-to-go from the half-yard line, Bobcat quarterback Talon Palmer couldn’t quite make the handoff and Morenci recovered the fumble just outside its own goal line.

The Wildcats managed to get some breathing room but its offensive ended up stalling just as the second quarter began.

Benson then switched its offense to a shotgun, hurry-up tempo and the change paid off as Barney made three Wildcats miss on a 30-yard TD run. The extra point was no good, however, and Morenci still had the lead, 7-6.

Once the Bobcats tasted the end zone there was no stopping them, however, and Benson utilized Palmer’s arm and its slew of running backs’ legs to get back into scoring position just before the half.

The Morenci defense was in bend but don’t break mode and had held back near its own end zone with time running out in the second quarter. However, facing a 4th and 6 with just seconds left in the half, Benson’s Barney scored his second TD of the night as he zipped untouched through the left side as Morenci’s defensive end covered the quarterback instead on an apparent run-option play. Barney also dove in for the 2-point conversion and Benson took the lead into halftime, 14-7.

It was all Benson in the second half, starting with an accidental mid-range onside kick recovery that set them up at Morenci’s 27-yard line. Two plays later, Villalobos followed his blockers around the right side to pay dirt and Benson was quickly up 21-7 early in the third quarter.

“It was actually intentional, he was actually supposed to go deep but he screwed it up,” Determan said about the mid-range onside kick. “That just happens but sometimes you get lucky. Sometimes lucky is better than good.”

On Morenci’s next possession, Benson got the ball back just outside the red zone on another turnover as Barney sacked Blair and caused a fumble.

However, after a couple of penalties moved the ball back, Palmer had an issue on the center/quarterback exchange and Morenci’s Omar Ortega gathered up the fumble.

Morenci couldn’t move the ball on offense, however, and turned it over on downs. Palmer took advantage of the turnover and put a pretty pass right in Nikitas’ breadbasket. The receiver caught the pass in stride and dashed in the rest of the way for a 35-yard TD, putting Benson up 28-7.

The Morenci faithful still rallied behind their team, but after a punt, Barney broke the fans’ backs with an untouched 50-yard TD run up the middle to stretch the score to 35-7, still in the third quarter.

Morenci then tried to come back through the air and Blair floated a beautiful-looking deep pass for Isaiah Nofchissey, however, Benson’s Jimmy Lerblance made an even better play on the ball and came down with the interception.

As the fourth quarter hit, Villalobos made one of the best runs of the day, zigging and zagging through the Morenci defense on his way to a 34-yard TD run to put the Bobcats up 42-7.

Later in the quarter, backup fullback (and normally a lineman) sophomore Jace Barney put the final nail in the coffin as he went 25 yards straight up the gut to score and Benson came away with the big victory, 49-7.

After the contest, the Gila Herald’s Player of the Game, Carson Barney, gave props to his lineman for creating the holes to get him into the second level of the defense.

“(It’s) all to my line,” Carson Barney said. “I trust my line a lot. They execute and I find the hole and hit it.”

Morenci will look to bounce back next week on the road at Willcox (1-1).

Benson will have what should be a cakewalk against Santa Rita (1-1) next week before facing perennial 2A leader Thatcher (1-1) on Sept. 20 in Benson for what aims to be a tough showdown between a couple of the top teams in 2A.

In 3A, Safford (1-1) notched its first win of the season on the road at Wickenburg (0-2) with a 36-8 victory. The Bulldogs will next travel to Thatcher on Friday, Sept. 13 for its big local rivalry game.

In 2A, Thatcher bounced back from its opening-season loss to blank the 3A Show Low Cougars (2-1) 29-0. Thatcher will next host Safford in the rivalry game Friday, Sept. 13.

The Pima Roughriders (1-1) got their first win of the season with a stunning 28-24 victory over the Willcox Cowboys (1-1). Pima will continue on the road and will travel to face the Alchesay Falcons (1-1) on Friday, Sept. 19.

Raymundo Frasquillo contributed to this report.