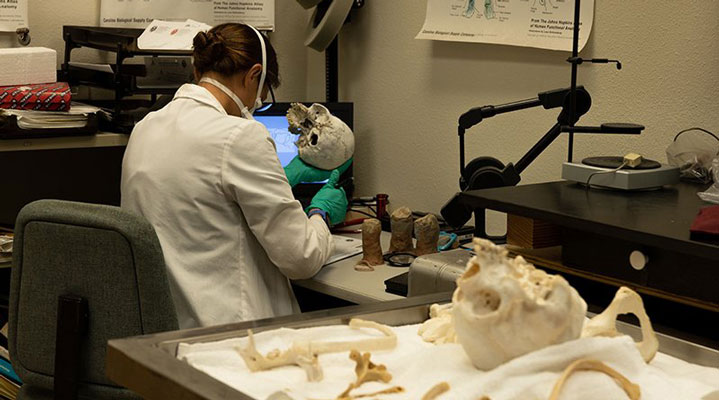 File Photo By Raphael Romero Ruiz/Cronkite Borderlands Project: Examining unidentified remains is just one of the jobs for medical examiners, who have seen caseloads surge with a spike in the state’s death rate in recent years. In this 2021 photo, a doctor with the Pima County Medical Examiner’s Office examines a set of remains.

WASHINGTON D.C. – Dr. Gregory Hess says he has enough forensic pathologists on staff for the Pima County Medical Examiner’s Office to keep pace with the office’s caseload, but they are still stretched thin.

And his office is one of the lucky ones.

As the nation enters the third year under the threat of COVID-19, Arizona medical examiners say they are struggling to keep up with rising caseloads driven largely by rising deaths from the virus at a time when there is a shortage in forensic pathologists.

It’s not just Arizona: In states across the U.S., medical examiners are reporting sharp increases in their caseloads as COVID-19 and related increases in overdose and other deaths strain their resources.

“We are fully staffed right now but we’re kind of in the minority,” Hess said. “A lot of places in the United States don’t have enough staff to keep up with the increased caseload, never mind … the load that they had prior to the pandemic, prior to this recent wave of overdose deaths that you see across the country.”

Dr. Jeff Johnson, the chief medical examiner in Maricopa County, said the death rate for the county has stayed high through 2021 and early 2022, creating large caseloads for an office that is already facing a shortage of forensic pathologists.

“One of the struggles that we experience is that because there’s so few (pathologists) that train every year, and so few that are available, it takes us a really long time to get somebody to join us when we have a vacancy,” Johnson said.

“So while you wait for that, you’ve got all the rest of your physicians who are struggling and if you have two or three vacancies at the same time, then that just magnifies everything,” he said.

Johnson said the National Association for Medical Examiners, the accrediting body for forensic pathologists and medical examiner’s offices, recommends that one physician do no more than 325 “autopsy equivalents” per year. The three Arizona counties accredited by the association – Coconino, Maricopa, and Pima counties – all meet that standard.

But that comes as the total number of deaths in the state jumped a remarkable 25% from 2019 to 2020, a year when some smaller counties saw deaths rise almost 50% year over year. Deaths continued to rise in 2021, according to data from the Arizona Department of Health Services, from 75,700 to 80,733 – a more modest rise of 6.7% but still well over the population growth of 1.7% that year.

Pima County faces high caseloads in part because it handles deaths from Cochise, Graham, La Paz, and Santa Cruz counties. But it has been able to cope because it has remained fully staffed throughout the pandemic.

Hess attributes his office’s ability to avoid the shortage of forensic pathologists to the availability of the University of Arizona’s pathology residency program.

Johnson also noted that the increased caseloads have been driven by the fentanyl crisis, which was made worse by the pandemic.

“We’ve seen a really strong upward trajectory in Maricopa County since 2015, the number of fentanyl deaths that we’ve seen between then and 2021 is nearly doubled every year,” Johnson said.

Both Johnson and Hess said that even though their offices are stressed, they have been able to keep up with the caseload. Hess said it’s impossible to predict how the death rate will fluctuate or if it will return to pre-pandemic levels.

“I think everyone thought that the pandemic was going to kind of come and go, but it lingers,” he said. “We may have more waves of different variants and the mortality may stay high.”

Both Hess and Johnson agree the best way to combat the high caseloads is to increase education and opportunities for forensic pathology. The UArizona pathology residency is the only one of its kind in the state, according to Hess, making it more difficult for students to enter the field and take their expertise to other areas of the state.

It’s also not a field that many students are interested in, Johnson said, but if they recognized the importance of the work, it could help ease the strain on medical examiner’s offices.

“I think that the pandemic has highlighted how important medical death investigation systems are for communities and … for those public health datasets that allow policymakers and public health officials and public safety officials to design interventions to improve the situation,” Johnson said.

“We wouldn’t know about the opioid crisis if it wasn’t for medical examiner’s offices doing this work and highlighting these things,” he said.