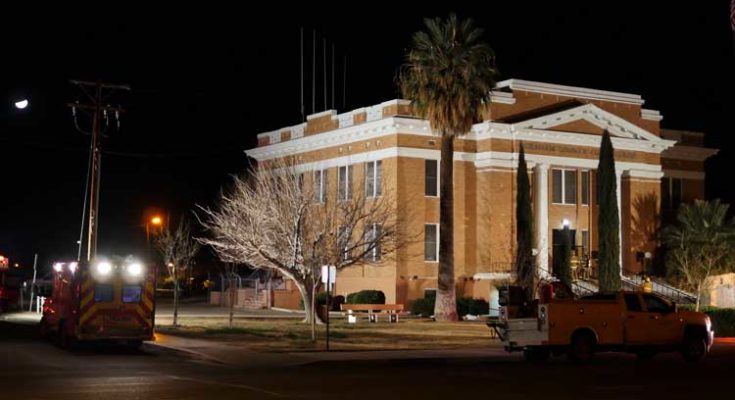 SAFFORD – Authorities and firefighters were dispatched to the Graham County Courthouse at 800 W. Main St. late Thursday night after someone started a fire in its breezeway.

A person was seen running from the fire, and it was quickly reported.

According to witness accounts, firefighters stopped the blaze from spreading out from the alcove under the stairs and catching the rest of the historic courthouse on fire. However, there was reportedly some smoke damage to the basement area of the building, which houses the Graham County Attorney’s Office, Victim’s Witness and the Graham County Superior Court Pro Tem courtroom. The area was renovated in early 2017 after it suffered severe flood damage in the Oct. 9, 2016, hail storm.

Trucks from the volunteer Safford Fire Department were seen leaving the area a little after 1 a.m.

As of 8 a.m. Friday morning, police were still searching for the arson suspect, and the courthouse was still taped off as a crime scene.

The Graham County Courthouse was built in 1916 and is on the National Register of Historic Places.