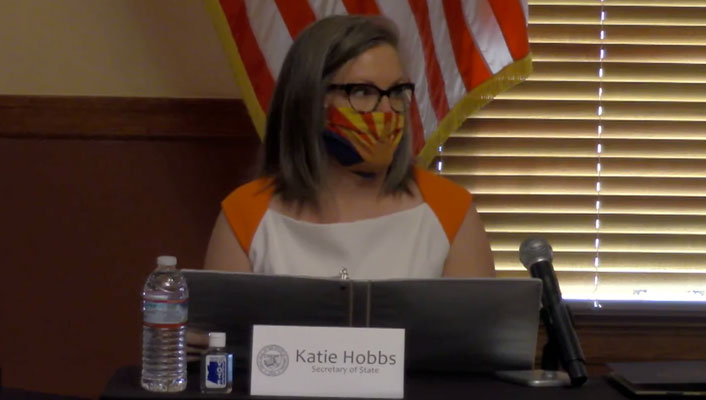 “Despite the unprecedented challenges, Arizonans showed up for our Democracy,” Hobbs said. “Every Arizona voter has my thanks and should know that they can stand proud that this election was conducted with transparency, accuracy, and fairness in accordance with Arizona’s laws and election procedures despite numerous unfounded claims to the contrary.”

With the certification, Arizona’s 11 electoral college votes were awarded to Democrat Joe Biden, who narrowly defeated incumbent President Donald J. Trump by 10,457 votes out of more than 3.4 million cast.

“We had a tremendous landslide Electoral College victory,” Trump said earlier this year in Michigan about the 2016 election. “Like people haven’t seen in a long time.”

Watch video of the certification here. The video starts at about 11:15.

The certification allows Democrat Mark Kelly to take his place in former Sen. John McCain’s seat to fill out the final two years of his term. Kelly defeated Republican Martha McSally, who had been appointed by Ducey to the seat after McCain’s death.

Kelly is expected to be sworn in at noon on Wednesday to immediately take his place in the Senate, giving Arizona two Democrat senators. Sen. Kyrsten Sinema previously defeated McSally in 2018.

“I also want to thank all the county election officials who overcame significant challenges we faced heading into this election and administered what was easily the smoothest and, according to outgoing CIZA (Cybersecurity and Infrastructure Security Agency) Director Chris Krebs, most secure election in recent history,” Hobbs said.

Along with the certification, Proposition 207 legalizing recreational marijuana in Arizona now becomes law. There is a five-day window for anyone to contest the outcome of any race or proposition certified today in court.