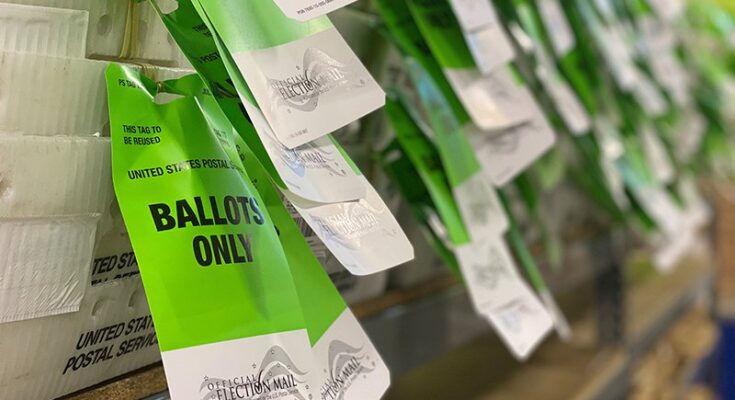 Photo Courtesy Maricopa County Elections Department: The fight over the 2020 election continues in Arizona, where state lawmakers this year filed the third-highest number of voting restriction bills in the nation, according to a national survey. Four of the 23 voting restriction bills have a shot at passing, while none of the 15 that would expand voting access is still alive as the Legislature winds down.

PHOENIX – Arizona lawmakers, who began the year with one of the highest numbers of voting restriction bills in the nation, are winding down a legislative session in which it appears only a few of those bills will survive.

But that doesn’t mean voting rights activists are happy.

Ryan Snow, associate counsel for the Lawyers’ Committee for Civil Rights Under Law, called it a “death by a million cuts.”

“Officials … have taken to erecting a litany of barriers that any one of which might sound on its face that it’s not that big of a deal,” Snow said. “But when you take them together, it creates a restrictive process that disproportionately affects voters of color, low-wealth voters, young voters, and other politically disabled voters.”

Supporters of the bills disagree and say that the state – coming off the divisive 2020 election and in the midst of a contentious audit of Maricopa County’s returns – needs to restore faith in the election process and “ensure Arizona’s elections are fair and transparent.”

“In order to maintain voter trust in our elections, it is important to provide the necessary safeguards so that voters can be confident in casting their ballots,” said Noah Weinrich, press secretary for Heritage Action, in an emailed statement.

Arizona Republican lawmakers introduced the third-highest number of voting restriction bills this year, according to the Brennan Center for Justice at New York University, which said the state’s 23 bills trailed only Texas, with 49, and Georgia, with 25. Nationwide, 361 such bills were introduced, it said.

The Brennan Center report also said Arizona lawmakers introduced 15 bills to expand voting access through such measures as automatic and same-day voter registration, restoring voting rights for felons and more. All of those bills were introduced by Democrats, and all have already been shot down.

Some of the most controversial GOP bills appear to be dead for the session, including two that would have pre-empted a federal voting rights bill currently pending in Congress and one that would have let the Legislature overturn the results of a presidential election and remove the slate of electors.

But political observers say four measures appear headed to approval in the Legislature, where Republicans hold slim majorities in both the House and the Senate.

SB 1485 would remove voters from the Permanent Early Voting List of people who automatically get mail-in ballots – while still keeping them on the voter rolls – if they failed to vote in two consecutive election cycles. SB 1713 would require that voters add proof of an approved ID, like a driver’s license or tribal ID, on a mail-in ballot.

HB 2792 would prohibit election officials from sending mail-in ballots to voters who did not specifically request them, and SB 1003 would limit the amount of time voters have to fix a missing or inconsistent signature on their mail-in ballot.

Rep. Reginald Bolding Jr., D-Phoenix, said he expects those four will ultimately pass the GOP-controlled chambers and be sent to Gov. Doug Ducey for his signature.

Ducey has not said publicly where he stands on the measures, and a spokesman said the governor does not comment on pending legislation.

But Ducey, a Republican, defended the state’s elections in November, in the face of attacks from then-President Donald Trump and his supporters who spent months claiming election improprieties that were eventually thrown out of courts across the country.

“In Arizona, we have some of the strongest election laws in the country,” Ducey tweeted on Nov. 30. “The problems that exist in other states simply don’t apply here.”

Claims of election fraud were also rejected by Attorney General Mark Brnovich, also a Republican, and Secretary of State Katie Hobbs, a Democrat. Nationally, the Department of Homeland Security’s Cybersecurity & Infrastructure Security Agency called “the November 3rd election was the most secure in American history … There is no evidence that any voting system deleted or lost votes, changed votes, or was in any way compromised.”

Those assurances did little to calm critics, who filed scores of unsuccessful legal challenges last fall and, when those didn’t work, went to state capitals where they filed a total of 361 bills in state legislatures to tighten voting regulations.

Democrats in Congress pushed back with HR 1, the For the People Act, which would require states to implement policies like automatic and same-day voter registration, limiting voter roll purges, improving cybersecurity, and more. It passed the House in March and is pending in the Senate.

Democrats at the state and national levels have repeatedly accused the GOP of pushing bills that would take voting rights back to the Jim Crow era of racial segregation, a claim blasted by North Carolina Lt. Gov. Mark Robinson during a congressional hearing last week.

Robinson instead attacked HR 1 as “despicable, the entire thing is designed to keep one party in power and ensure they stay there indefinitely” by taking away states’ rights and handing Democrats an advantage.

“We’re not going to back down from something that’s reasonable, that is common sense and protects the integrity of our elections,” said Ugenti-Rita, who was backed by SB 1713 sponsor Sen. J.D. Mesnard, R-Chandler.

But Stephen Nuño-Pérez, associate professor of politics and international affairs at Northern Arizona University, said the GOP bills would undeniably erect barriers between voters and the ballot box, especially low-income voters and people of color.

“Several hundred new voting laws are all in the service of reducing access to the voting booth, by minorities, by those with fewer resources, and, by extension, those less likely to vote Republican,” Nuño-Pérez said.

Warren Stewart Sr., chairman of the African American Christian Coalition, said the GOP bills would roll back years of progress that people of color have fought tooth and nail for. The bills “tell communities of color and advocates of justice that their supporters want to go back to the Jim Crow era when voting rights were suppressed,” he said.

“People of color are being targeted because they voted in November in historic numbers,” Stewart said. “We see these egregious, hypocritical, unpatriotic bills being passed in the name of voter integrity, which is a farce, and we will fight and we will eventually win.”

Bolding said that while he expects the four GOP bills will pass in this session, he is not about to give up the fight.

“Myself, my colleagues, the community will be fighting against any direct attacks on democracy that we see because we don’t believe that’s what Arizona should be known for,” he said.