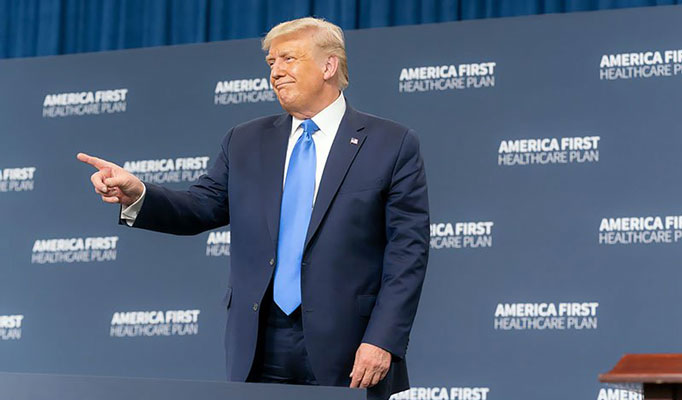 File Photo By Shealah Craighead/Cronkite News: Former President Donald Trump, shown here in an October 2020 file photo, began asking donors for contributions in November 2020 to challenge the election results – and thousands of Arizonans responded, donating $1.5 million. The Jan. 6 committee said that money was diverted to other Trump funds, but no Arizona donors have complained.

WASHINGTON – Scottsdale resident William Acorn had made occasional donations to conservative candidates in the past, but never considered himself an “avid political person.”

That changed in 2020, after a flurry of emails from then-President Donald Trump’s campaign begging supporters to “step up and give us the resources” to challenge Democrats’ plans “to count ILLEGAL ballots.” Acorn became one of tens of thousands of Arizonans who responded with almost 35,000 individual donations to Trump’s “Election Defense Fund.”

The only problem is, no such fund existed.

The campaign actually funneled most of the Election Defense Fund donations to Trump’s then-new Save America political action committee, said Amanda Wick, senior investigative counsel for the House committee investigating the Jan. 6 attack on the Capitol. Rep. Zoe Lofgren, D-Calif., said the Trump campaign “misled” donors, what she called in a June committee hearing “a big rip off.”

Acorn, for one, is not feeling ripped off.

“I do believe it was (stolen),” he said of the 2020 election. “I believe that people really don’t understand the underlying issues going on in this country. This country is being hijacked by ultra-, ultra-liberal elitists.”

Acorn, who called the Jan. 6 investigation “absolute nonsense,” said he bumped up his political contributions after Trump’s appeal. Federal Election Commission records show that he had donated $712 to Save America PAC and $5,850 to other Trump-affiliated fundraising committees since September 2016.

That was part of the $1.51 million given by thousands of Arizonans to the Save America PAC, according to the FEC data. Nationally, the political action committee had received $45.28 million in contributions from individual donors from late 2020 through June 30, 2022.

Scottsdale led all Arizona cities for donations, giving $247,582, with donors from Phoenix and Tucson close behind. Retirees were by far the biggest group of Arizona donors, accounting for 56% of all contributions from the state to the Save America PAC.

Arizona ranked fifth among states for the total donated, trailing only the much-larger states of California, Texas, Florida, and New York, the FEC said.

Save America has disbursed millions of its donations to pro-Trump organizations and other services – including $59,953 for car rentals, $2.1 million to the Trump Hotel, and $5,000 to the Kari Lake for Arizona campaign, according to the FEC.

“Theoretically, they would and should be upset by that,” Frank Gonzalez, a political scientist at the University of Arizona, said of Trump donors. “But they’d sort of be saying, ‘Hey, the Big Lie, was just a lie. Democracy was not threatened.’”

Whatever their thinking, Trump’s haul from Arizona is a testament to his continuing popularity in the state, said one Republican consultant.

“It’s clear that President Trump still is very popular amongst a large segment of the Republican Party,” said Chad Willems, a partner at Phoenix-based Summit Consulting Group. “There’s a perhaps smaller segment out there that believes the election was stolen.”

Willems, who has worked with prominent Republicans like Joe Arpaio, said Trump’s team continues to be a “force to be reckoned with” for its ability to capitalize on politically charged events to bring in donations.

“The Trump efforts have really sucked all the money up out there,” Willems said. “They’re very, very aggressive, very consistent in their fundraising appeals. And they’re going after that grassroots crowd that contributes to causes like this.”

That can not only make it hard for other candidates to raise funds, but it gives greater weight to Trump endorsements, which are highly sought after and can help a candidate in a crowded field stand out.

Arizonans sent Save America PAC $469,460 in the months immediately after the 2020 election. The giving continued in 2021 and 2022 when donations from the state added another $1 million to the PAC’s coffers. Donations surged in October, one month after the Republican-led audit of Maricopa County election results found that President Joe Biden actually won more votes than originally reported.

“Humans are very emotional beings and they are motivated to believe certain things because it feels comfortable,” Gonzalez said of the donors’ motivation.

“It gives you anxiety to think that the things you believe are wrong and so they will do what’s necessary,” he said. “Perception is reality. So they will selectively attend to the facts that fit their worldview.”

Acorn said he knows that “both Republicans and Democrats have had corruption.” But he intends to keep on giving to Trump and conservative causes because he thinks it’s the right thing to do.

“What matters to me is, yes, fraud in any circumstance, whether it’s Republicans or Democrats,” Acorn said. “But I will tell you that my belief is that the most important thing is your basic fundamental ideal as to what you’re trying to accomplish.”