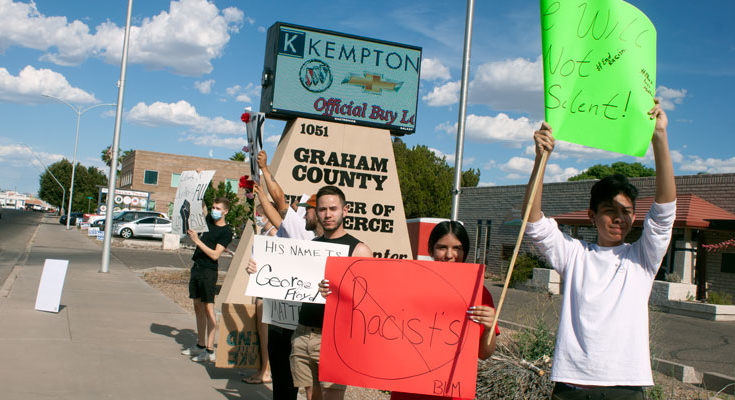 Participants advise they will abide by statewide curfew order

SAFFORD – A group of locals from the surrounding area held a peaceful protest regarding racial injustice in Safford on Monday.

Unlike in major metropolitan areas, the handful of protesters simply held signs and wanted to bring publicity to their beliefs rather than damage property or loot.

“We’re here today because our community has been quiet for too long,” protester Kevin Reed said. “There is a big portion of us in this valley who wants to use our voice for right; use our voice to help our fellow Americans – more specifically – our black fellow Americans, our brothers and sisters who have been discriminated against for years (with) systematic racism, stereotypes, everything.”

The group held handmade signs along U.S. Highway 70 in front of the Graham County Chamber of Commerce and came prepared with water and ice to help last out in the mid-afternoon heat. Participants said they would adhere to Governor Doug Ducey’s statewide curfew mandate and head out when their time was complete.

Protester John Martinez sported two signs and said he experienced some slight racism growing up in the Gila Valley.

“Growing up I would catch slight glimpses of racism and it always kind of made me feel uncomfortable,” Martinez said. “So, I kind of wanted to come out to let people know that I’m not about it. I support our fellow African Americans and I just want everybody to live in peace and, hopefully, we can achieve world peace where everyone is equal.”

Riots nationwide have erupted over the Minnesota incident in which Minnesota Police officer Derek Chauvin killed George Floyd. Those in Phoenix are also believed to be protesting the fatal shooting of Dion Johnson by an Arizona Department of Public Safety trooper after a “struggle”.

Chauvin was terminated from the police department and has been charged with third-degree murder.

“There’s a revolution in the country and we wanted to bring it to rural America as well,” Reed said.