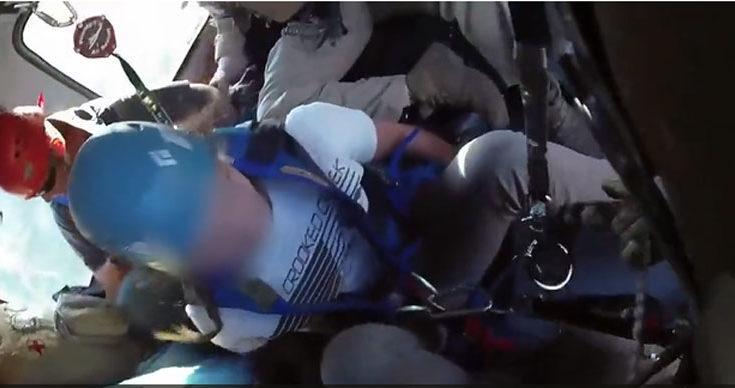 Thursday, the Tucson Air Branch received a call from the Joint Interagency Operations Center that five hikers needed assistance and possible rescue on Baboquivari Peak, stating they were dehydrated and had no water. The Tucson Air Branch sent a UH-60 Black Hawk crew with three AMO EMTs on board to conduct a medical evaluation and possible extraction.

The UH-60 crew located the hikers, they were all conscious and no need for medical attention, however, they were unable to proceed due to heat and dehydration. The AMO agents conducted five hoist extractions, safely relocating the hikers to a nearby road, where U.S. Border Patrol EMT’s met them, quickly evaluated the hikers, and escorted them back to their vehicles.

“Our agents are the best at what they do,” said Norman Montgomery, Director, Tucson Air Branch. “The terrain in the Tucson area of operation can be very dangerous, especially as temperatures increase, and our aircrews and EMT’s are vital to carrying out our humanitarian, rescue and law enforcement missions.”

In Fiscal Year 2020 to date, AMO agents have rescued 79 individuals.

The Tucson Air Branch is responsible for more than 365 miles of border with Mexico. The area of responsibility extends north to Nevada and Utah using the eastern and western state boundaries of Arizona as lateral limits. The state comprises more than 114,000 square miles of sparsely populated areas in the west desert and border areas where most aviation efforts are concentrated against narcotics and human smuggling.