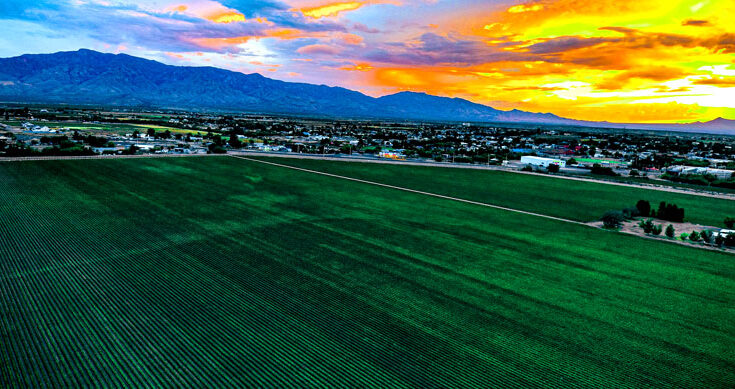 Jon Johnson Photo/Gila Herald: The new Pima High School is slated to be built on a 40-acre parcel combined from two separate parcels across Highway 70 from the Speedway gas station. The land is currently being used to grow cotton.

Site acquisition is set to be complete by end of September

Pima School Superintendent Sean Rickert said it was unusual for him to hire an architect prior to closing on the land for the new high school but to keep his timeline of opening in the fall of 2025 he has learned to adapt.

That was part of his message in his update to the Pima Town Council at its Tuesday night meeting.

The school board has selected SPS+ Architects of Scottsdale to design the new high school. The firm specializes in K-12 building construction, along with other higher education buildings, sports facilities, multi-family, and commercial properties.

As first reported by the Gila Herald, the proposed location is 40 acres of current cotton fields just north of U.S. Highway 70 north of the Speedway gas station at 325 E. U.S. Highway 70. There are two separate landowners they are in discussions with and the state will be the purchaser of the land.

The site is nearly double the current size of all of Pima Schools (22 acres) and will be split out of two parcels that combine to equal 60 acres. Ball fields (football, soccer, baseball, softball) are slated to go on 13 acres on the southwest parcel while having the landowner keep seven acres of highway frontage for future commercial purposes. The area is closer to the Ash Creek area and being only ballfields wouldn’t be as susceptible to flooding.

The main portion of the school would go on the southern part of the eastern parcel for sale and the landowner would keep the northern section by Center Street for development properties.

“We’re working with the property owners to maximize the value of the tax base for Pima because that’s good for the schools and the rest of the community,” Rickert said.

To get to the new high school, talks have begun regarding possibly extending 200 South for the new ingress and possibly having a traffic light at the intersection with Highway 70.

“That gives us really safe access to the highway,” Rickert said. “If ADOT determines, based on traffic studies down the road, that that’s where we need to have a stop light then that’s a great idea. The state of Arizona’s Department of Administration Division of School Facilities had asked that we look into the feasibility of putting (a) traffic circle in that area. At this point, that does not appear to be feasible.”

At the Tuesday night meeting, Rickert said the school hopes to close on the property deal in September and that an architect for the 60,000-square-foot high school was chosen.

Pima has been awarded a new construction grant of $22.3 million to build the high school and has secured a loan of nearly $4.5 million to be paid through regular school operating revenue.

That $4.5 million will be used for things the state won’t pay for.

The extra financing will be done in the same way the district financed the recent elementary expansion and there will be no additional tax or cost to the residents. The school is also looking at other grant funding and does not anticipate going out for a bond for the new school.

Pima High School’s current enrollment is about 350 students, and the new high school is expected to open in the fall of 2025 with an enrollment of about 425. The school will initially be built to house up to 500 students but can be easily expanded to house 600 students at full build-out, according to Rickert.

According to the school’s timetable, they have allotted one year to design the school and two years for construction, giving an opening of August 2025.

Since the classrooms and buildings left behind from the old high school are not up to code for student use, they will be utilized as administration offices, according to Rickert.