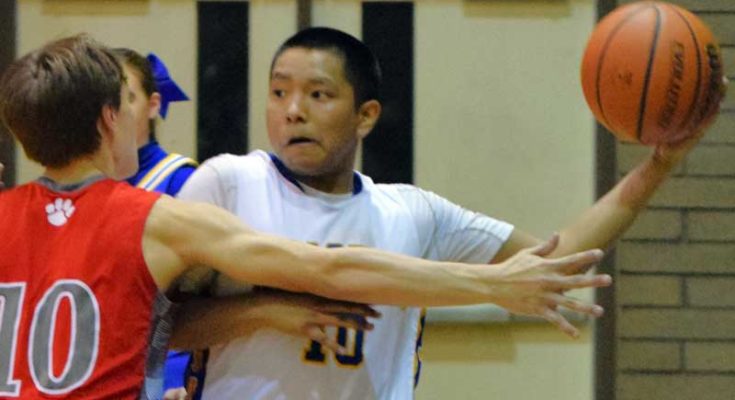 Photo By Raymundo Frasquillo: Sophomore Malachi Rogers, right, finds an open teammate to pass the ball to against Duncan.

Fort Thomas fell, 79-64,  in Phoenix against the NFL Yet Eagles on Tuesday, Jan. 30. It’s last regular season game is in Patagonia versus the Lobos on Thursday, Feb. 1.

The Fort will be the site of the regional tourney beginning Tuesday, Feb. 6, at 4 p.m.

The Apaches spotted the Wildkats eight points before lighting up their own side of the scoreboard with 2:40 elapsed in the contest on senior Kobe Talgo’s and-1 play.

Duncan matched that deficit twice early in the second period, 10-13 with 1:08 elapsed and 12-15 nine seconds later, but got no closer the rest of the game. The Wildkats trailed by double figures early in the third period and throughout the second half.

The Apaches recognized senior team members along with their parents at halftime. Kaitlynn Hinton and Iversin Nelson were crowned sports queen and king, respectively.