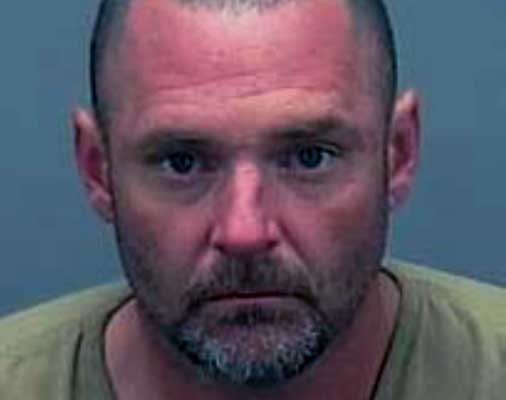 Contributed Photo/Courtesy GCSO: Jason Barker was booked into the Graham County Adult Detention Facility on warrants after being found passed out at a gas station with heroin.

SAFFORD – Tryptophan in turkey and a big belly of steak may make some people sleepy but that’s not what the Safford Police believe made a group of steak salespeople from Phoenix pass out at the Giant gas station at 105 E. U.S. Highway 70 on Friday.

Officers were dispatched to the gas station at about 5:49 a.m. regarding a welfare check on subjects in a van parked near the gas pumps who appeared to be asleep.

An officer was able to wake the driver, Anthony Gillespie, and his front seat passenger, but Gillespie exhibited signs of being under the influence of heroin. Additionally, Gillespie advised nobody else was in the van, but when the officer opened the back door an additional man, Jason Barker, 38, of Avondale, was found lying on the floor.

Gillespie said the group were steak salespeople for Wholesome Foods from Phoenix and were in the area selling steaks. A freezer full of steaks was located in the back of the van.

Gillespie also allegedly admitted to using methamphetamine the previous day. A meth pipe and a meth bong were located in the van and Gillespie claimed ownership.

Barker was found to have two syringes in his pocket filled with liquid that later tested to contain heroin. It was later learned that Baker also had active warrants for his arrest out of Maricopa County Superior Court for a probation violation and for failure to appear on a possession of drug paraphernalia charge. According to the police report, there was an alert on the warrants that Baker was prone to have violent tendencies.

Gillespie was going to be given a citation for possession of drug paraphernalia, but a high-priority call came into the Graham County Sheriff’s Office and with only one deputy on at that time the Safford officer released Gillespie to go and assist the deputy.

Before leaving, the officer informed Gillespie that charges would be pending and that neither he nor his passenger should drive the van due to their admission of methamphetamine use. The officer later returned to the gas station and the van was nowhere to be seen.

The officer then submitted a charge of possession of drug paraphernalia against Gillespie to the Safford City Attorney.