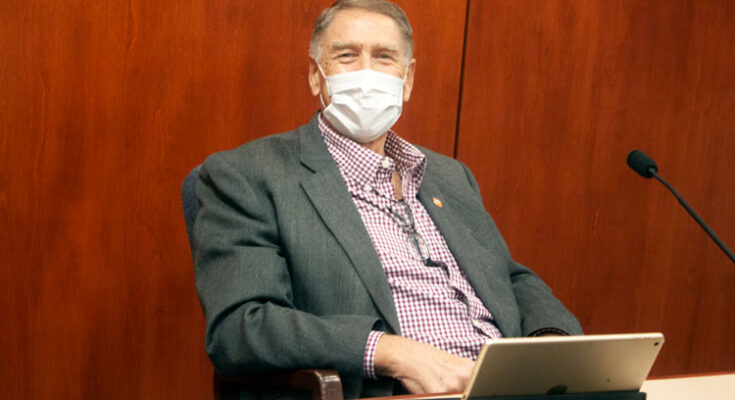 Jon Johnson Photo/Gila Herald: Jim Palmer takes part in his last BOS meeting on Dec. 21. After serving the county for 20 years, Palmer retired from his position.

SAFFORD – If you are like me, you can’t really imagine a time when Jim Palmer wasn’t serving on the Graham County Board of Supervisors, but that will soon be a reality.

After 20 years on the board, Palmer retired this year. Come Jan. 4, 2021, newly elected John Howard (R-District 2) will be sworn in as his replacement.

“I am very excited and honored to be able to represent District 2 as Graham County Supervisor, a seat that has been held for the last 20years by Supervisor Jim Palmer,” Howard told the Gila Herald. “Jim has dedicated his life serving the people of Graham County and is highly respected at the state and local level, his accomplishments has been a very vital part of keeping our community and county successful. I appreciate the help he has given me in making my transition into this challenge a lot easier, I want to thank him for his friendship and wish him the best of luck.”

Palmer is the last of the big-three supervisors I covered for most of my tenure reporting in the Gila Valley, the others being Mark Herrington and Drew John. For you old-timers out there, sorry, but anyone else predates my time in the Gila Valley.

During his tenure on the board, Palmer was part of some of Graham County’s biggest projects, including the construction of the 8th Avenue Bridge, the new Graham County Adult Detention Facility, and the Safford Operations copper mine.

Through it all, Palmer led by example, put the needs of the entire community in the forefront, and was a beacon for others on how to deal with the “great state of Maricopa” while getting the most for rural Arizona, especially Graham County.

“I will miss Jim’s ease in communicating the issues Graham County faces,” said Danny Smith (R-District 3 Supervisor). “He is one of the most informed and dedicated county supervisors there have been, evidenced party by our own Arizona County Supervisors Association electing him twice as our president in the past 20 years.”

Smith also welcomed Palmer’s successor to the board.

“John Howard is going to do great serving District 2,” he said.

From the start of the new millennium, until the end of 2020, Jim Palmer has seen the county through highs and lows and now has helped guide the county while it battles the novel coronavirus COVID-19 pandemic. Through it all, he has remained cordial, an avid listener, and was clear and concise on his decisions. Palmer’s door was always open to me – I’ve had the pleasure of interviewing him in his own home on occasion – and I appreciate his availability to discuss the tough topics of the day throughout his tenure on the board. He has been a great example to current members Danny Smith (R-District 3) and Paul David (D-District 1), both of whom are also equally available and willing to discuss matters of the day with this reporter, and I thank them for that and welcome new Supervisor Howard to the fold.

“During the last four years, Supervisor Palmer has been instrumental in securing over $2 million dollars in additional funding for Graham County’s indigent nursing home patients,” David told the Gila Herald. “This translates to a cost savings for every property owner. The 8th Avenue Bridge and roundabout as well as the county jail have been built since 2016. Jim’s influence at the local, state and national level will be sorely missed. He’s been a great mentor, gentleman and the consummate statesman.”

On Dec. 21, Palmer took part in his last board meeting, which included more than an hour of discussion regarding the use of a greenhouse at NatureSweet on the other side of Mt. Graham. While his decisions may not have always been the most popular, they all have been well-researched and knowledgeable. For that, we at the Gila Herald thank Mr. Palmer for his time on the board and wish him the best in his future endeavors.