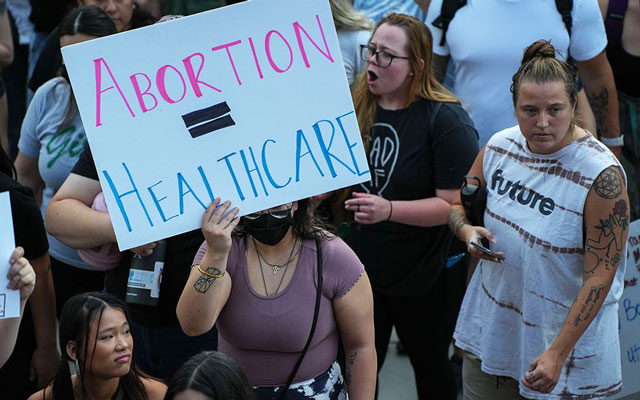 File Photo By Troy Hill/Cronkite News: Abortion-rights advocates vowed to fight a Pima County Superior Court ruling that reinstated an Arizona law that criminalizes abortion in most cases. Activists in this file photo rally outside the Arizona Capitol in June, after the U.S. Supreme Court overturned its Roe v. Wade ruling.

PHOENIX – Planned Parenthood Arizona said Monday it will appeal a Pima County judge’s ruling that restored a territorial-era law that criminalized abortion in the state.

The ruling by Superior Court Judge Kellie Johnson has effectively shuttered abortion services in Arizona, with some clinics saying they have instead turned to helping patients find care in nearby states where abortions are still legal.

While abortion opponents praised the ruling, Planned Parenthood Arizona said in a statement Monday that it means that “members of the community are being and will continue to be denied of the medical care that they deserve” and must be reversed.

“Planned Parenthood Arizona is seeking an immediate stay of the Pima County Superior Court’s ruling that lifted the injunction on the state’s 1864 abortion ban,” said a statement from the organization Monday.

Planned Parenthood announced Friday that it would halt abortion services in the state “to protect our providers and patients” in the wake of Johnson’s ruling. Clinics across the state have done the same.

“There is no abortion service in Arizona,” said Amy Fitch-Heacock, spokesperson for Arizonans for Reproductive Freedom.

In meantime, all they can do is refer patients out of state.

“We are currently contacting neighboring states and trying to partner with them,” said Ashleigh Feiring, a nurse at Camelback Family Planning.

It is the latest fallout from the Supreme Court’s decision in June that overturned its landmark 1973 Roe v. Wade decision that recognized a right to an abortion. The court’s ruling this summer in Dobbs v. Jackson Women’s Health cleared the way for states to enact severe abortion restrictions – including outright bans – that had been outlawed under Roe.

Arizona is now one of those states.

A territorial-era law that made it a criminal offense to perform an abortion or take any action “with intent thereby to procure the miscarriage of such woman, unless it is necessary to save her life” had been enjoined since 1973 by Roe. With Roe gone, Arizona Attorney General Mark Brnovich argued in August that the old law, which carries a sentence of up to five years in prison, should be reinstated.

Planned Parenthood, joined by Pima County Attorney Laura Conover, argued that reinstating the old law when there are still 50 years of laws on the books regulating abortion as a legal medical procedure, would lead to confusion for both health care providers and prosecutors. They urged Johnson to “harmonize” those laws.

But Johnson on Friday sided with Brnovich, ruling that “because the legal basis for the judgment entered in 1973 has now been overruled, it must vacate the judgment in its entirety” and restore the old law. Her ruling came just one day before a new Arizona law was set to take effect, allowing abortions up to 15 weeks of pregnancy.

Abortion clinics that had suspended services in August, while awaiting a decision, gradually resumed abortion care. All that changed with Friday’s ruling, which caused them to suspend services once more.

Anti-abortion groups were pleased by the ruling and its fallout.

“Abortion not only takes the life of an unborn child,” said Cathi Herrod, president of the Center for Arizona Policy. “It also hurts women. Most everyone knows a woman who had an abortion and who suffered as a result, either physically or emotionally.”

Pro-abortion groups like Planned Parenthood do not see it the same way.

Planned Parenthood Arizona President and CEO Brittany Fonteno said Friday that Johnson’s ruling “does not reflect the will of the people, as Arizonans are overwhelmingly in favor of abortion access.”

“Planned Parenthood will continue to stand with Arizonans and fight for abortion access in the face of continued attacks,” her Friday statement said.

Besides court appeals, both sides said that the next fight will be at the ballot box.

Herrod noted that the Supreme Court majority said in Dobbs that the decision on abortion should be left to state lawmakers, not the courts.

Fitch-Heacock said abortion-rights groups will be stressing the importance of voting in November.

“We are really focused on getting out the vote for candidates who are pro-abortion,” she said.