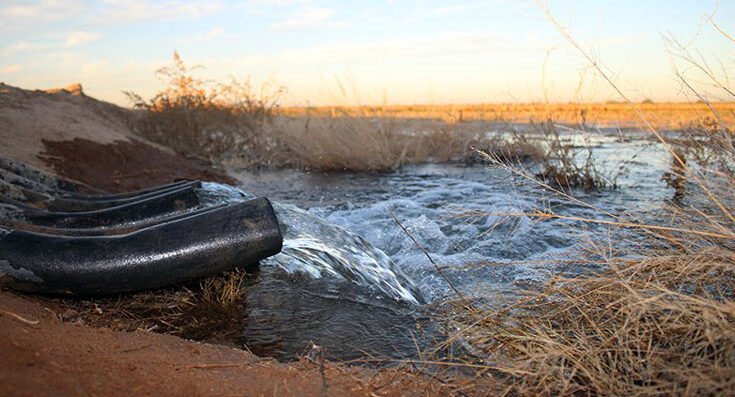 Photo By Luke Runyon/KUNC: Water from the Central Arizona Project spills onto a field in rural Pinal County.

COLORADO RIVER – A showdown is looming on the Colorado River. The river’s existing management guidelines are set to expire in 2026. The states that draw water from it are about to undertake a new round of negotiations over the river’s future, while it’s facing worsening dry conditions due – in part – to rising temperatures.

In Utah, all eyes are pointing toward the state’s southwest corner. That’s where the proposed Lake Powell pipeline would transport water from the Colorado River’s second-largest reservoir and deposit it near the fast-growing communities of Washington County.

The proposed pipeline is shaping up to be an important bargaining chip in the state’s overall Colorado River negotiation strategy.

Utah’s pursuit of the project also has led the six other states in the watershed – Colorado, Wyoming, New Mexico, Nevada, California, and Arizona – to raise serious concerns.

Don Ipson is a Republican state senator from the area that the pipeline would serve. The other basin states are trying to kill the project, he said.

“They want to bring this to a resolution and push us out, and we can’t let that happen,” Ipson said. “They have whole staffs, that their whole purpose is to stop Utah and particularly stop the Lake Powell pipeline.”

In an attempt to fight back and form a strategy for the renegotiation of the broader Colorado River guidelines, Utah lawmakers voted to create a new Colorado River Authority. The group will be focused on pushing for more of Utah’s share of the river. It’ll cost more than $9 million to start.

Gene Shawcroft will be part of the new authority. He’s also Utah’s representative for inter-state negotiations and holds a seat on the Upper Colorado River Commission. States should have the ability to use their water rights that were promised to them nearly a century ago in the Colorado River Compact of 1922, he said.

“Each state in my mind should have the ability to use its water when it chooses to do so,” Shawcroft said.

Utah hasn’t used its full allocation of Colorado River water. That’s why Shawcroft and other state leaders think they should be able to develop more of the river, including projects like the Lake Powell pipeline.

Recent studies have shown that incremental policy prescriptions for what ails the warming and drying Colorado River are unlikely to work. And that in the very near future, climate change could push the existing legal structure to its breaking point.

Shawcroft recognizes that the drought in the West is forcing basin states to reconsider how water is shared. But critics of the pipeline say the state isn’t taking climate change seriously, and that if built, the pipeline threatens to upend the river system’s entire legal scaffolding.

The debate over the pipeline is not the first time disputes among the states have burst into the public square. But it does signal a change in norms. In the past, basin states have been reluctant to point accusatory fingers at specific projects outside their boundaries.

As Shawcroft prepares for future negotiations, he says his main goal is to, “make sure that Utah can use its share, its legal allocation, and to help make sure the other states get to use theirs as well. It’s a win-win.”

In Arizona, water from the Colorado River enters the Central Arizona Project canal and becomes a ribbon of blue that winds through miles of arid desert to reach the cities of Phoenix and Tucson, where it supplies homes, gardens, businesses, agriculture, and golf courses.

Under the 2019 Drought Contingency Plan, Arizona is already taking cuts to its CAP supply. If current projections hold, those cuts will increase nearly three-fold next year, said Ted Cooke, the project’s general manager.

Arizona could lose a lot more water if the levels in Lake Mead keep dropping. The state’s junior rights mean its Colorado River supply is more vulnerable than others. With drought plans in place now, Arizona is getting good practice at reining in its uses and finding flexibility as supplies shrink, he said.

“Maybe it is logical that Arizona should take more (cutbacks). And indeed when you look at the Drought Contingency Plan, at every tier level, Arizona’s taking the most, and sometimes a lot more,” Cooke said.

Just like the current set of managing guidelines, the Drought Contingency Plan is also set to expire in 2026. That means a new schedule for cutbacks is up for debate. Cooke said just because Arizona agreed in 2019 to steep cutbacks as Lake Mead declines, that doesn’t mean that will be the state’s starting point in the next round of negotiations. Other lower basin states also can cut back on their water use, and the pain of restricted use can be doled out more equitably, he said.

Arizona has reassembled and renamed the committee charged with negotiating the Drought Contingency Plan to handle the upcoming interbasin negotiations. That includes a diverse group of delegates representing cities, tribes, agriculture, industry, development, and government.

Kim Mitchell, senior water policy advisor for Western Resource Advocates, participated in the 2019 drought planning process and said though the talks were at times contentious, ultimately the state water community came together to reach an agreement, with the help of two tribes in the final deal.

But she and others still worry not everyone will get equal representation. Mitchell’s group receives funding from the Walton Family Foundation, which also supports KUNC’s Colorado River coverage.

“There are tribal voices on the Arizona Reconsultation Committee that represent three nations, and they will be a very valuable input on this process. But how do we hear what the other voices are for the numerous tribes in the state of Arizona?” Mitchell said.

That issue of inclusion and equity in the process is something every state in the basin will be dealing with as the negotiations get started.

As a desert state, Arizona water leaders are still coming to terms with how to adapt to a hotter, drier future.

CAP’s Ted Cooke said one consideration will be fundamental in the next round of talks: “How much water can the Colorado River reliably produce into the future is a question that will be at the core of all of these discussions,” Cooke said.

The Colorado River starts as a modest-sized stream high up in Colorado’s Rocky Mountain National Park. As the river flows through the Southwest, it picks up enough water from its tributaries to supply 40 million people across the seven basin states and Mexico.

About 70% of the river’s flow comes from Colorado’s Western Slope. That fact alone leads water officials in the state to feel protective of the river, said Colorado Water Conservation Board director Becky Mitchell. She also sits on the Upper Colorado River Commission.

“First and foremost, I think it’s important, as Colorado’s commissioner, that we’re looking at protecting our legal entitlement on the Colorado River and protecting our state’s waters for those who depend on it,” Mitchell said.

Leading up to this new round of negotiations, Upper Basin leaders, like Mitchell, have been under pressure to consider implementing what’s referred to as a “demand cap.” In theory, it could be one half of a “Grand Bargain,” a concept that’s been in the Colorado River management ether for years.

Water demands on the river in Colorado, Wyoming, Utah, and New Mexico have been flat since the late 1980s. Putting a hard limit on future uses would give water planners throughout the entire basin more certainty, and could appease downstream users from ever issuing a dreaded Compact Call on the river. But Mitchell said that much-buzzed-about concept is a non-starter.

“I’m not ready to go there just yet,” she said. “That’s not to say that we can’t, we don’t have to look at all responsible solutions, but I think we have to remember the foundation that is the Colorado River Compact.”

This is a fundamental tension on the river. States recognize the need to be thinking of and managing the watershed as a whole, but still jealously guard their own entitlements to water promised in the 100-year-old agreement, which embedded an impossible math problem in how the West shares the river.

Mitchell said, of course, she needs to have her own state’s needs top of mind, “but that doesn’t mean there’s not a way to get there without thinking about what’s best for the entire basin.”

Instead of looking at a hard use cap, Colorado and the rest of the Upper Basin is looking at a potential water market as a solution to a supply and demand mismatch. The conceptual program is called demand management. In its abstract form, the program would pay water users, such as farmers and ranchers, to temporarily rein in their use to prop up reservoirs in times of crisis.

For now, that complicated, controversial program is more palatable than capping future uses across the board, even if it would lessen the risk of future litigation among the states.

But even with all the competing interests and players, Mitchell said the mindset she’s taking with her into these negotiations is one of collaboration. Since the signing of the 1922 Colorado River Compact, the basin states have been working together, she said.

And like any long-term relationship, “it’s not always been pleasant, but we’ve been working together to develop solutions to protect this very critical water source,” she said.