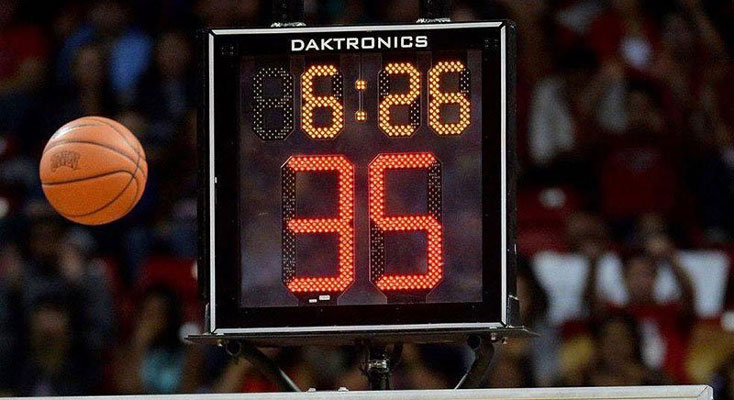 Photo Courtesy of Fox Sports North: A 35-second shot clock will be part of the 2022-23 basketball season for 6A to 3A schools. Although most coaches embrace the addition, they caution that shot clocks will require a learning curve.

PHOENIX – Talk about a game-changer.

After years of overwhelming support, the Arizona Interscholastic Association will add a 35-second shot clock to high school basketball in the 6A through 3A conferences.

This will be the first time a shot clock will be used for AIA-sanctioned high school basketball in the state. Although a vast majority of coaches, players, and fans approve of the change, financial and logistical issues have long strained schools across Arizona.

During the 2021-22 school year, each conference voted on whether to adopt rules outlined by the National Federation of High School Athletics that include a 35-second shot clock on each end of the court, and detailed rules for the officials and clock operators. The 6A through 3A conferences voted to adopt the rules, 2A and 1A did not.

Stinson and other shot clock supporters are excited because coaches will be forced to scheme differently. Teams no longer will be able to run out the game clock with a motion offense, and decisions on each offensive possession will have to be quicker.

Stinson also believes the shot clock gives an advantage to teams that play great defense. Teams with a strong defense when possession length was controlled by the offense should experience even higher levels of success with possessions limited to 35 seconds.

Coach Lucas Ramirez of Saguaro High School sees the installation of shot clocks helping to prepare his players for the next level.

“From a basketball standpoint, and just improving the game, I think it’s very beneficial,” Ramirez said. “It translates to the next level where everyone has a shot clock on the collegiate stage. If that’s what we want to prepare our guys for, then it’s fantastic.”

Some hold the opinion that the addition of the shot clock is unnecessary because, according to NCAA research, only 3.4% of high school basketball players go on to play any level of college basketball. But Stinson disagrees.

“It’s true that not everyone will play college, but everybody should want to strive to be better than what they are right now,” Stinson said. “That should be everyone’s goal. Shot clocks force our players to improve.”

Coach Ray Portela of Sunnyslope High School called the change a step in the right direction toward establishing consistency with high school basketball rules across the country.

“I just think it’s one of the rule changes that we’re going to have to adapt to sooner or later,” Portela said. “Everyone wants to have the same experience. No one wants to feel that they’re any lower than anyone else.”

Portela spoke about how his teams have played in many out-of-state tournaments, some with a shot clock and some without. He believes that a more consistent set of rules between states would be beneficial for the game overall.

“I just think if we’re all kind of on the same page and parallel, it’s just going to help our game out so there’s no confusion,” Portela said.

Kevin Standerfer, the athletic director at Snowflake High School, said his coaches are all for the new rule. They are excited to see how the rule change affects game pace and scoring.

He related the rule change to the addition of the three-point line in 1987 and how many opposed to shot clocks are bringing up the same hypotheticals that were used back then.

“Did (the three-point line) affect the game some? I would say it did,” Standerfer said. “At the start of a possession, you would try to inch closer and closer to take the closest shot possible. Now, players learn to stay back 18 to 20 feet so they can step into their three-point shot. There was a learning curve, but we adapted.”

A majority of issues with the new rules come from the production, delivery, and installation of the shot clocks.

Standerfer said Snowflake High handled the cost of the clocks, but he has heard that other northern Arizona schools have had issues getting the necessary funding. Some schools have an outdated main basketball scoreboard, which would not integrate with a shot clock and would require a replacement of the entire scoreboard system.

“We ordered our clocks in the spring. Schools operate financially between July 1 and June 30, and we were told it would be in and up by June 30,” Standerfer said. “But because of manufacturing issues, the product will not be in until the end of July and we still need to schedule a crew to come up here and install it.”

Standerfer also expressed a concern held by many athletic departments across the state: Will they be able to find qualified people to operate the shot clocks?

“My biggest concern is going to be finding someone who understands the rules,” Standerfer said. “And not just in Snowflake but anywhere you go, there’s going to be a learning curve over the next few years.”

Saguaro athletic director Matt Harris has high school and college basketball coaching experience, most recently as an assistant men’s basketball coach at Arizona Christian University. At the college level, Harris remembers stoppages in almost every game as the referee checked the scorer’s table to adjust or sync the shot clock.

The addition of a shot clock will undoubtedly change Arizona high school basketball, most believe for the better.

“(The shot clock) adds to the atmosphere and makes it feel like you’re in the NBA for some kids,” Stinson said. “Because this is the highest level some kids will ever play. (Varsity) high school basketball is their NBA.”