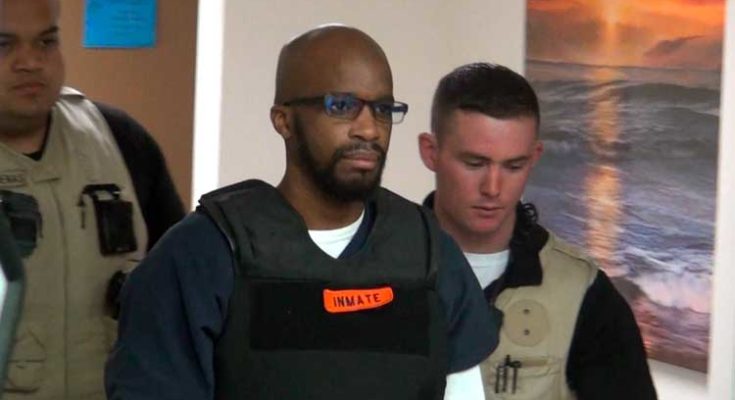 Jon Johnson Photo/Gila Herald: Salih Abdul-Haqq Zaid is led from the courtroom after being sentenced to 15 years for the shooting death of Jared Garcia.

Judge Sanders also sentenced Zaid to 10 years each on two charges of aggravated assault, 2.5 years for endangerment, 2.5 years for disorderly conduct with a weapon, and 1.5 years for unlawfully discharging a weapon within city limits. All of the sentences were deemed to run concurrent, however, which will not add any additional time to the larger, 15-year sentence.

However, Zaid is eligible for early release of one day for every seven served. Coupled with his 385 days already served incarcerated, that means Zaid will have about 11.8 years to serve in prison before he can be released. That means he will remain incarcerated until 2030. Graham County Chief Deputy Attorney L. Scott Bennett had argued for the maximum sentence of 21 years and Zaid’s attorney, Dennis McCarthy, had argued for the minimum sentence of 4 years.

In the end, Judge Sanders said he wouldn’t be able to make both sides happy but that he felt he had to honor what the jury had found and sentence appropriately to that standard despite how he personally felt the case should have been resolved.

Gone were the pressed suits and ties as Zaid entered the courtroom surrounded by correctional officers. Instead, he wore jail garb – including the orange jail Crocks, a bulletproof vest with “inmate” printed across the chest, handcuffs and leg shackles. No longer a man on trial but now a convicted inmate, he looked every bit the part.

The jury also found Zaid guilty of aggravated assault with a deadly weapon, aggravated assault, endangerment, disorderly conduct with a weapon, and unlawful discharge of a weapon within city limits. His charges were designated as dangerous crimes, thusly increasing the amount of prison time available.

Zaid’s attorney, Dennis McCarthy, had argued that the shooting was justified self-defense, but during interrogation by police Zaid seemingly admitted that he had committed the act out of revenge for being “punked” earlier in the night at the Bull Pen bar. The shooting occurred after Zaid had left the premises, appeared to return to his residence and, according to the prosecution, retrieved his AK-47 assault rifle. Zaid then returned to the Bull Pen bar and the night ended with him shooting Garcia in the parking lot.

“This is such a sad, sad case,” McCarthy said.

McCarthy went on to describe Zaid as an upstanding member of society and that he has been – according to Jail Commander Tim Graver – a model inmate while incarcerated.

“This is a man, judge, that but for today’s circumstances probably would have been one of our leaders in our community,” McCarthy said.

“This is a man of integrity, a man of good moral character. It astounds me that he is even here today.”

Garcia’s mother appeared visibly emotional as she held back tears during her impact statement to the court. She referred to Zaid as an “evil monster” repeatedly and described the scene at the hospital the night her son was shot.

“It was horrible,” she said. “It was so bad. All I wanted him to do was to breathe and he couldn’t because the evil monster took him . . . My whole world is gone.”

She described how Garcia was there for her when she was gravely ill two years ago and now in the aftermath, she has had to resume medical treatment.

“My heart is shattered,” she said. “I can’t eat. I can’t sleep. This was just so uncalled for.”

She told the judge that while Zaid may be in prison, his family can still visit him and see him while her son will never return. She then asked for Judge Sanders to sentence Zaid to the maximum penalty possible.

“I will never, ever forgive the evil monster for shooting and killing my son,” she said. “All I ask is that you please send him away for as long as you can.”

Zaid spoke in his own defense as well and described himself as an upstanding member of the community who was forced to make a tough decision. He also thanked Judge Sanders for coming out of retirement to perform the sentencing and that he believed Sanders would give an appropriate sentence.

“I choose to be trustworthy, loyal, helpful, friendly, courteous, kind, obedient, cheerful, thrifty, (inaudible), clean, and reverent,” Zaid said. “I choose to extend the olive branch and give my hand in friendship, fellowship, and brotherly love.”

“I still believe in doing the right thing. I did not create the circumstances in which we have come to meet. I was placed in a horrible position and had to make the most difficult decision.”

“Regardless of what has taken place, I still believe in humanity,” Zaid said.

He followed that up by turning his gaze toward the victim’s mother and said, “I still believe in love although some only choose to see hate.”

That moment might have added a few years to his sentence as Judge Sanders later said that he didn’t see much remorse to the family. However, Sanders did not find for any of the additional aggravators sought by the state and stayed only with the ones previously found by the jury. He also advised he had given weight to mitigators for Zaid and that he had read letters of support for him from his family – including an ex-wife – and his employer.

Prior to giving his sentence, Judge Sanders took a moment to speak about his thoughts on the case.

“To be very candor with everyone, the jury really didn’t believe either side,” Sanders said.

He also addressed Garcia’s mother and said no matter what the sentence, there’s no amount of time that will fill the hole created with the loss of her son.

“There’s nothing I can do to give you your son back,” Sanders said.

After the sentencing, McCarthy politely declined to comment other than to say that Zaid would be appealing his conviction. However, Graham County Chief Deputy Attorney L. Scott Bennett offered some thoughts.

“This was an extremely difficult case and there are never any winners when a life is lost, we just do the best we can to see that justice is done,” Bennett said. “The dedication of the Safford Police Department, with help from neighboring agencies, should be commended. Safford’s detectives and officers were outstanding and the hundreds of working hours dedicated to this investigation are noteworthy and truly appreciated.  Both Judge Sanders and the jury spent many hours on this case and we recognize their sacrifice and appreciate the service.  Ultimately, our thoughts and sympathy are with the Garcia and Hansen family. We truly hope that they can find peace in what was accomplished.”