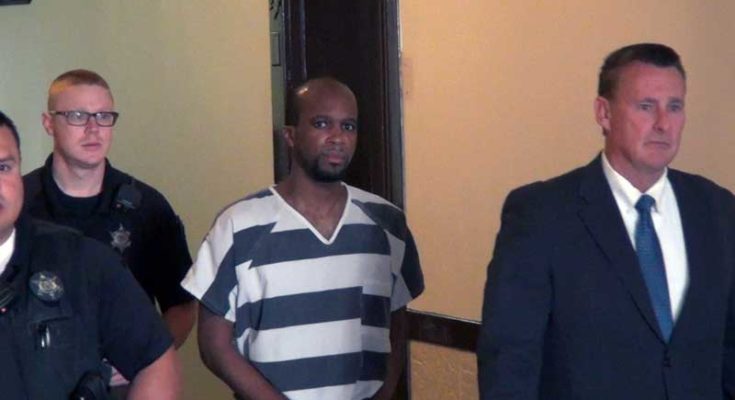 Jon Johnson File Photo/Gila Herald: Salih Abdul-Haqq Zaid makes his way into the courtroom flanked by detention officers on his left and his attorney, Dennis McCarthy, on his right. Zaid is accused of first-degree murder in the shooting homicide of Jared Garcia on April 26, 2017. Jury selection for the trial was scheduled to begin today.

Past assaults from both defendant and victim inadmissible

SAFFORD – The jury in the homicide trial of Salih Abdul-Haqq Zaid, 40, was scheduled to begin being selected today. However, whoever is selected will not be privy to past assault charges from both the defendant and the victim.

Zaid is accused of shooting Jared Michael Garcia, 35, to death outside of the Bull Pen bar at 912 W. Thatcher Blvd. in the early morning hours of April 26, 2017, after getting into an altercation with Garcia inside the bar.

Both Garcia and Zaid have a history of previous assaults, with Garcia’s typically being bar fights and Zaid’s assault charges being misdemeanors. Regardless, Graham County Superior Court Judge Pro Tem D. Corey Sanders has ruled that neither of the men’s previous assault histories will be admissible in court.

During a preliminary hearing in May, Safford detective Bill Wren testified on behalf of the prosecution and basically laid out the state’s position.

According to Wren’s testimony of witness statements to police, Zaid was jovial and appeared to be drinking with Garcia and two other men, identified as Joseph Rodriguez and Ryan Casillas, when a confrontation occurred and Garcia struck Zaid in his face, knocking him off his bar stool. Zaid was later overheard in the bathroom telling Garcia that if Garcia wanted to fight he was willing to fight as well.

Other witnesses reported Zaid had become disruptive in the bar and had spilled beer or knocked over a beer bottle. He was then escorted out of the bar, but before doing so appeared to have patched things up with Garcia and the two had shaken hands, indicating that their beef was over, according to Wren’s testimony regarding witness statements.

However, video surveillance from the Bull Pen and multiple other entities and businesses show what appears to be Zaid’s Ford F-150 pickup truck leave the parking lot of the Bull Pen and travel to his residence at the 8th Street Apartments at 3333 W. 8th St. in Thatcher. The pickup on surveillance ran the stop sign at 8th Street and 14th Avenue and a red light at 8th Street and 20th Avenue before pulling into the apartment complex. While there is no footage of the driver exiting and entering an apartment, the truck then left the complex roughly seven minutes later and was shown on various other businesses’ surveillance footage heading through the Home Depot parking lot and eastbound on U.S. Highway 70 before pulling into the Bull Pen parking lot and backing into a space on the western side of the lot. The total time the truck was gone from the bar and back was said to be roughly 20 minutes. A later search warrant of Zaid’s apartment discovered open cabinets that contained multiple variations of ammunition and firearm-related items, including a five-round magazine.

Zaid then re-entered the bar, according to witnesses, and Rodriguez and Zaid left back into the parking lot, followed roughly 30 seconds later by Casillas and Garcia.

When all four men were in the parking lot, Zaid went to his truck and allegedly said, “Come here, I want to show you something.”

Garcia approached Zaid’s truck from the rear, and Rodriguez and Casillas said they saw Zaid shoulder a rifle and shoot Garcia as Garcia put his hands up in the air and turned to run. An autopsy report from the Pima County Medical Examiner’s office showed no powder burns on Garcia’s body and that he suffered a single gunshot wound that entered his left side and exited the right side of his torso. The medical examiner said Garcia was at least three feet or more away from Zaid when he was shot.

Garcia was rushed to Mt. Graham Regional Medical Center but could not be saved.

After the shooting, Zaid left the parking lot in his truck and drove by the Safford Police Department on 10th Avenue. By then, officers had already received a call about the shooting and a description of the suspect’s truck. A Safford sergeant was pulling out of the department as Zaid drove by and soon after initiated a traffic stop. At that time, the sergeant located an AK-47 rifle loaded with a 30-round magazine and a .357 revolver in Zaid’s truck.

During interrogation, Zaid allegedly readily admitted to shooting Garcia with his rifle. After learning Garcia had died, Zaid said, “I’m a (expletive deleted) murderer,” according to Wren’s testimony. Zaid then followed that up by saying, “How do I really say it’s self-defense because I went back into the bar?”

At the preliminary hearing in May, Zaid’s attorney Dennis McCarthy called the incident a tragic situation but one that was initiated by Garcia, whom he described as a “very sizable man” roughly 6’3” and 250-270 pounds versus Zaid who is a “frail” 5’7”, McCarthy said.

“He was justified in defending himself,” McCarthy said. “He had an aggressive individual who was approaching him only feet away while these other two individuals are right there. Mr. Zaid was left with no other choice but to defend himself. He was about to take another beating by an enormous man.”

Graham County Chief Deputy County Attorney L. Scott Bennett countered McCarthy’s argument by saying Zaid had already squashed the beef with Garcia by shaking his hand and had left the bar and was safe at home when he decided to retrieve an AK-47, load it with a high-capacity magazine and return to the bar armed.

“The defendant went to his truck and at his truck said, ‘Come here, I want to show you something,’ and then just happened to have a gun locked and loaded and ready to fire as a completely unexpected victim walked toward him,” Bennett said. “The testimony was not that the defendant shot the victim straight through the heart as he was attacking, it was that he shot him in the side as he was turning to run.”

McCarthy has handled several high-profile cases for Graham County in the past, including the Paul Ray Simon Garcia, 37, case, in which Paul Ray was sentenced to 35 years in prison for using drugs to molest his daughter. Paul Ray later died in prison, only a month into serving his term.

McCarthy also briefly worked on the Mariceo Inez Rea, 20, murder case in 2015, which was Graham County’s last fatal shooting prior to the Zaid case. In Rea’s case, the defendant was accused of shooting Manuel Espinoza III, 31, to death on June 25, 2015, over a drug dispute when Rea was just 18. He pleaded guilty in March 2015 to an amended charge of murder in the second degree – a Class-1 dangerous felony – and was sentenced to a stipulated maximum term of 25 years in prison by Judge Sanders.

The trial is scheduled to run for three weeks.