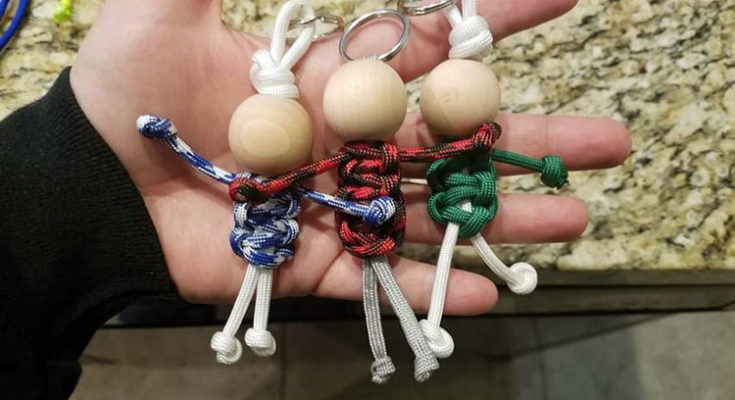 Contributed Photo: An 11-year-old boy began making these keychains as a fundraiser to help out Tish Russom with her medical bills after she suffered a Middle Cerebral Aneurysm.

SAFFORD – Recently, a massage therapist I know told me about her own injuries and I thought, ‘who helps the healers when they need to be helped?’ Lo and behold, before the day was over I was presented with information that answers that question.

Tish “The Coffee Lady” Russom has been assisting others in the community for quite some time and started the popular “Coffee on the Straight” program by handing out free coffee and other drinks to help commuters between Safford and Morenci stay alert on the highway, which has seen a number of fatalities due to drowsy drivers and other reasons. She created “Humanity Served With A Smile” to assist her community efforts and help people with food, clothing, furniture, or whatever a person is in need.

Recently, Russom was diagnosed with a 4mm Middle Cerebral Aneurysm after suffering a migraine headache that led her to the Emergency Room.

To have brain surgery on the affected area, Russom has to pay $7,200 out of pocket, which is not feasible by herself as she is living on a fixed budget. She is literally staring at a possible life or death decision made for her by her finances.

Enter 11-year-old Lucas Soohy. Lucas began making keychains that he makes and rocks and gems as a fundraiser for Russom after he heard of her plight.

The keychains are made into paracord people and he is also selling various rocks he has found and polished. In just one week, Lucas has raised more than $400.

Lucas’ mother, Kayla Soohy, said her son came up with the idea himself.

“I messaged Tish to run the idea by her, jokingly letting her know that it’s possible that Lucas might raise about $7 by selling these items,” Kayla said. “After getting her approval, we created a flyer and I started driving my son around our neighborhood. I was extremely surprised that after the first few days he had raised several hundred dollars . . . I was also pleasantly surprised that a few businesses even made donations to his fundraiser – LAB Audio Studios in Safford, Country Chic Art Gallery & Crafters Boutique in Duncan, and The Ranch House Restaurant in Duncan.”

“My moms were talking about how to raise money and I thought that it would be a good idea for me to make some keychains and sell them around our neighborhood,” Lucas said. “So, I can make them in about two minutes and I sell them for $3 to $5. Also, my nana and pap pap take me rockhounding a lot, so I have a ton of cool rocks and gems that I’ve collected and polished, so I wanted to sell those too. My mom drove me and my friend Sam around our neighborhood and we sold the rocks and keychains door-to-door. We took turns carrying the big box of rocks because it was so heavy. One lady even said I could set up a table at her yard sale in a few weeks to sell them. In four days, I sold (more than) $300 worth of stuff just in my own neighborhood. Then, some people emailed by mom and asked for custom orders, so I made those and my mom shipped them to people in different states . . . It makes me feel good to be able to give money back to someone who has given so much to other people.”

Keychains with wooden heads are $5, regular keychains are $3, and assorted rocks and gems run .25 to $1 each. Those who wish to purchase any of the items or donate to the cause can do so by contacting Kayla at kayla.soohy@gmail.com.

“My wife and I are both incredibly proud of Lucas and his ongoing commitment to helping others in need,” Kayla said.

While Russom is on light duty due to doctor’s orders, she is also trying to help herself by making Tye-dye T-shirts and jewelry. The shirts and jewelry can be purchased by contacting Russom through her Facebook page here.

“I’m not used to sitting back and letting everybody else do everything,” Russom said. “So, I was trying to find a way for them to help them help me.”

In addition to Lucas’ fundraiser, Russom said her niece, Britnie Gonzalez, also had a bake sale in which she sold lemon cakes and made more than $700.

“That’s how amazing this community is,” Russom said.

For those who can and desire to donate to Russom’s healthcare, there is also a GoFundMe account that can be found here.