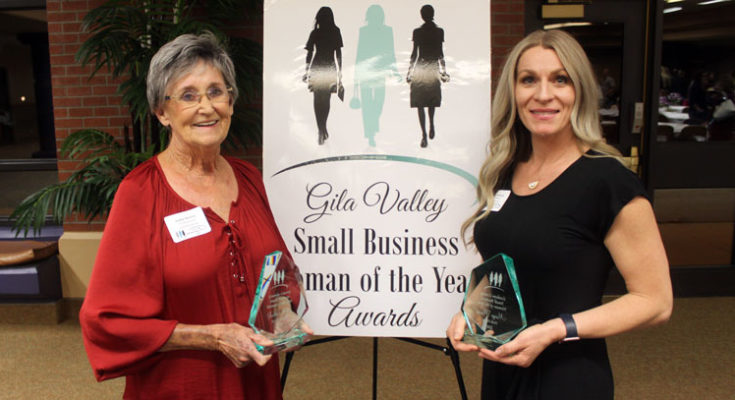 Jon Johnson Photo/Gila Herald: Jackie Norton of PJ’s Restaurant in Clifton, left, and Margo Henrie of Fizek Fitness in Thatcher were chosen as the 2019 Gila Valley Small Business Woman of the Year for Greenlee and Graham counties, respectively.

THATCHER – A restauranteur and a fitness club owner walked away with the top honors at the 7th annual Gila Valley Small Business Woman of the Year Awards on Thursday.

A dessert banquet was held in honor of the 23 nominees at the Gherald L. Hoopes Jr. Activities Center at Eastern Arizona College.

The event was emceed by Charmaine Chidester, Business Counselor with Eastern Arizona College’s Small Business Development Center, who said the focus was to recognize all the nominees and get their stories out to the public and help them have their businesses recognized. Winners were chosen by the 2019 Gila Valley Small Business Woman of the Year Committee made up of nine individuals – including Chidester – from Graham and Greenlee counties.

“We had some amazing nominees this year,” Chidester said. “It’s never an easy process narrowing it down to two winners.”

Jackie Norton, of PJ’s Restaurant in Clifton, and Margo Henrie, of Fizek Fitness in Thatcher, were awarded as Gila Valley Small Business Woman of the Year for Greenlee and Graham counties, respectively. In 2017, the award was split up to include one winner from both Graham and Greenlee counties and each of them was awarded a plaque, a check for $1,000 and a $500 advertising package from Double R Communications.

Norton has operated PJ’s in Clifton for 40 years and serves the community Mexican-American fare for breakfast, lunch, and dinner seven days a week. Currently, three generations of her family work at the restaurant.

“It’s such a privilege and honor because it’s hard work,” Norton told the Gila Herald.

Those who love her food can thank the flood of 1983, which damaged the building of her first business, a fabric shop, and caused her to purchase the building where PJ’s is located. Four years after the historic flood, Norton switched to making food and has become the choice in Clifton for a “home-away-from-home” dining experience.

On Thursday, she expressed her gratitude to the audience and gave a special thanks to the “other entrepreneurs” from Greenlee County.

“Because I know how hard it is to be successful there,” she said.

“This is very, very nice. I am so appreciative. And for you young ones, hang in there.”

Henrie has operated Fizek Fitness for nearly six years and has helped hundreds of women achieve their fitness goals in a safe facility geared specifically toward their needs. In addition to her business, she also voluntarily teaches Zumba at area schools, is active in her church, and works with EAC to provide college credit for students. Fizek Fitness has also sponsored numerous local events since its inception, including 5K runs, youth and adult sports teams, and donated to the Safford Skatepark construction.

Henrie told the Gila Herald that the program has been important to her because it has expanded the group of people she gets to know.

“For me, that’s huge because I’m not from here,” she said. “I have no roots here, so I’ve gotten to know a lot of people and it’s been awesome.”

Two years after opening, Fizek Fitness was so popular it had to expand from its 2,100-square-foot building to a 9,600-square-foot facility and currently employs two part-time workers and 12 independent contractors.

Chidester said the impact of the small businesses run by women in Graham and Greenlee counties and the support and outreach they provide is not realized by most people.

“Just look at Main Street in Safford,” Chidester said. “If you can visually go down Main Street and if you know the business owners, the majority of them are women. I mean, Main Street would cease to exist if we took away our small business owners (who) are women. And we’re starting to see the same thing on Chase Creek in Clifton.”

The Gila Herald salutes all of the 2019 Gila Valley Small Business Woman of the Year nominees.