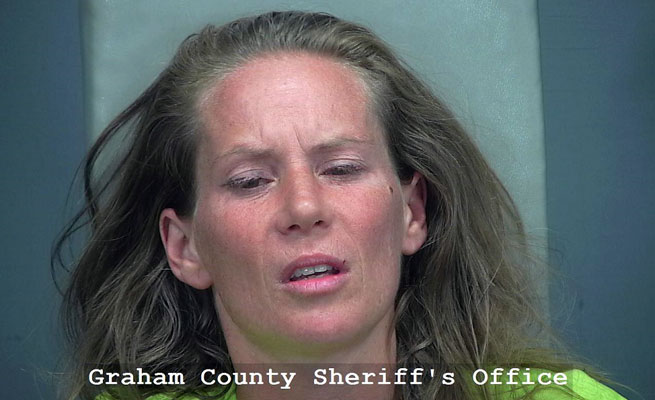 Contributed Photo/Courtesy GCSO: Julia Korinko-Lovett, 39, was booked on charges of aggravated assault with a deadly weapon and disorderly conduct.

SAFFORD – Julia Korinko-Lovett, 39, was arrested Saturday and booked into the Graham County Adult Detention Facility on charges of aggravated assault with a deadly weapon/domestic violence, and disorderly conduct/domestic violence.

Multiple officers were dispatched Monday to a residence in the area of Main Street and U.S. Highway 191 where roommates were arguing over one of the roommates being evicted, according to a Safford Police news release. During the argument, Korinko-Lovett allegedly stabbed her roommate in the shoulder. The injured person was treated at the scene and then transported to Mt. Graham Regional Medical Center for further treatment of the non-life-threatening injury.

Officers removed Korinko-Lovett from the residence and placed her under arrest for the aggravated assault.

Korinko-Lovett had recently had another run-in with officers after allegedly breaking into the Magnum Towing yard where her vehicle was being stored and damaging the car.

Officers were called at about 10:48 a.m. on Thursday, June 18, to the Magnum Towing yard at 530 E. U.S. Highway 70 after Korinko-Lovett was observed breaking the windows of her vehicle that was inside the yard. According to an employee, Korinko-Lovett was upset about the tow and storage bill (approximately $1,600 according to her statement to police) and wanted to get her personal effects out of the vehicle.

The tow operator later informed the Gila Herald that they never denied her from retrieving her belongings and were on the way to the tow yard after hours to open it for her but she declined to wait. That information wasn’t relayed in the original police report.

Korinko-Lovett then agreed to surrender the title to the tow yard operator. Korinko-Lovett was also advised she was trespassed from the yard and that a charge of trespassing in the second degree would be sent to prosecutors to review.

This article was updated Tuesday evening to correct the spelling of Korinko-Lovett and include information from the tow yard operator.