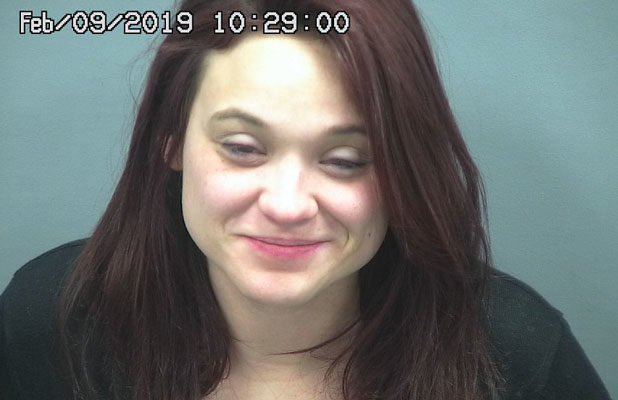 Photo/Courtesy GCSO: Evanna Ferguson was booked into the jail after allegedly traveling 108 mph in a 35 mph while intoxicated.

Safford – Evanna Elise Ferguson, 30, of Graham County, was arrested and booked into the Graham County Adult Detention Facility on Feb. 9 after allegedly driving 108 mph in a 35 mph zone while intoxicated. A portable breath test later showed her breath/alcohol concentration to be .241.

A Safford officer reported he was westbound in the 1000 block of U.S. Highway 70 at about 2:35 a.m. when an eastbound black hatchback was listed at 65 mph in a 45 mph zone on his in-car radar.

The officer turned to go after the vehicle and noticed that even though he was traveling at 80 mph the vehicle was still pulling away from him. Up ahead, the officer reported seeing the car swerving in the road and debris flying up into the air.

The hatchback reportedly ran a red stoplight at the intersection with 5th Avenue, and the officer’s in-dash radar listed the vehicle’s speed now at 108 mph in the 35 mph zone.

The officer then activated his emergency lights and the car came to a stop at the intersection with 11th Avenue, where the original officer and a second assisting officer performed a high-risk stop and ordered the driver out at gunpoint.

The driver, identified as Ferguson, was placed under arrest and was handcuffed. At that time, the officer reported being able to smell an odor of an alcoholic beverage on her breath.

Ferguson’s passenger reportedly said she had offered him a ride home but then just started driving around instead. He said he didn’t know why she was going so fast and admitted she was driving at least 100 mph as they ran the red light at 5th Avenue. The passenger was released from the scene and called for a ride.

At the Safford Police Department, Ferguson attempted to perform a field sobriety test and failed multiple aspects before the officer discontinued the test for her own safety, according to his report. Ferguson then took a portable breath test that showed her breath/alcohol concentration to be .241, which is above the threshold for an extreme DUI. Ferguson initially denied allowing the officers to procure her blood, but a warrant was granted and a sample was taken for testing purposes. She was then booked into the jail on charges of DUI, reckless driving, and criminal speeding