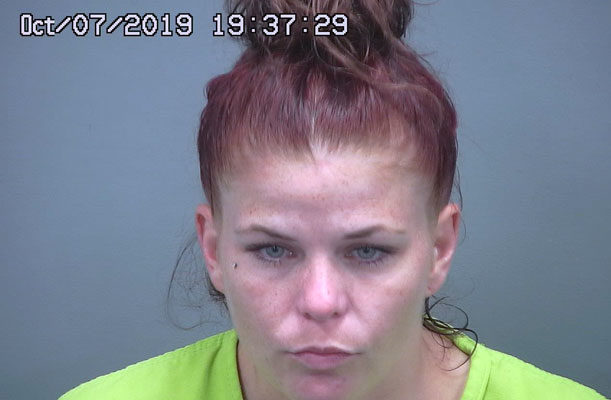 Contributed Photo/Courtesy GCSO: Brittanny Matthews, 29, was booked into the Graham County Adult Detention Facility on charges of criminal damage, possession of a narcotic drug, and possession of drug paraphernalia.

SAFFORD – Brittany Matthews, 29, of Safford, was arrested and booked into the Graham County Adult Detention Facility on Monday, Oct. 7, on charges of criminal damage, possession of a narcotic drug (heroin), and possession of drug paraphernalia.

According to a Safford Police report, officers were initially dispatched at about 10:13 a.m. to a residence on 3rd Street regarding criminal damage and drug paraphernalia.

Upon arrival, the resident informed the officer that she was in the process of evicting her daughter, Matthews, and that recently she discovered graffiti spray-painted in Matthews’ bedroom and had removed a copious amount of drug paraphernalia related to the use of heroin.

The officer noted the criminal damage and received the paraphernalia from the resident, which included four straws, a spoon with drug residue, several pieces of tin foil, two caps commonly used to dilute heroin, and a metal pick with drug residue.

Later that same day, officers were dispatched back to the residence at about 4:11 p.m. after Matthews had returned to recover some of her items. Upon contact, Matthews advised she still had three days left before the eviction was complete and she wanted to retrieve her backpacks. Matthews’ boyfriend was eventually given her property from the residence.

However, Matthews allegedly admitted to the criminal damage and that the drug paraphernalia found was hers and was taken into custody. At that time, officers located more paraphernalia, including a syringe loaded with “watered down heroin”, in a small bag that was next to Matthews upon arrival. Matthews allegedly admitted the items in the bag, including four syringes including the loaded one, a silver spoon with drug residue, blue tourniquet, three cut straws, two pieces of tin foil, and two Q-tips were all hers and were there for the purpose of using heroin.

At that time, Matthews also advised that she was currently on pre-trial services while waiting for adjudication regarding a DUI charge.

She was then transported to the jail and booked on the above-listed charges and the heroin and paraphernalia were placed into evidence storage. The heroin in the syringe was emptied into a glass vial and all of the syringes were disposed of in a sharps container.