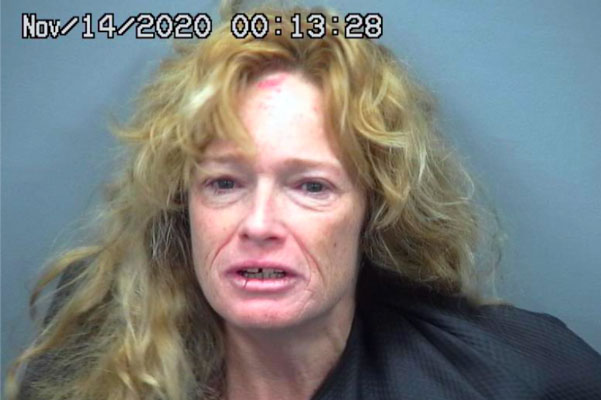 SAFFORD – Domestic violence victims are overwhelmingly women, however, men can be victims as well.

Such is the case regarding Becky Shelton, 45, who was arrested and booked into the Graham County Adult Detention Facility on charges of assault/domestic violence, resisting arrest, and criminal damage.

According to a Safford Police report, officers were dispatched at about 6:24 p.m. on Friday, Nov. 13 to a residence on 4th Street regarding a domestic assault.

Upon arrival, the victim was located sitting on a curb across the street from the residence. The victim advised that he and his assailant, Shelton, were splitting up and a verbal argument ensued after he requested she leave.

The argument escalated to Shelton allegedly striking him multiple times in his head and then his back as he rolled away from the assault.

The officer then spoke to Shelton, who was “very animated in her movements”. Shelton allegedly told the officer that she had been dealing with another family situation yesterday and she was mad because she felt the police ignored her call. She then allegedly admitted to striking the victim.

A Graham County Sheriff’s Office deputy was nearby and agreed to transport Shelton to the jail for the Safford officer. During transport, however, Shelton allegedly banged her head against the plexiglass separating the back from the front of the patrol vehicle, causing it to crack.

Upon arrival at the jail, Shelton was placed into a restraint chair due to “her flailing and screaming and being uncooperative,” according to the report.

The officer advised that Shelton remained in the chair throughout the entire booking process and that she never calmed down while he was present. Shelton was then booked into jail on the assault/domestic violence charge, as well as resisting arrest and criminal damage for cracking the plexiglass of the deputy’s vehicle.