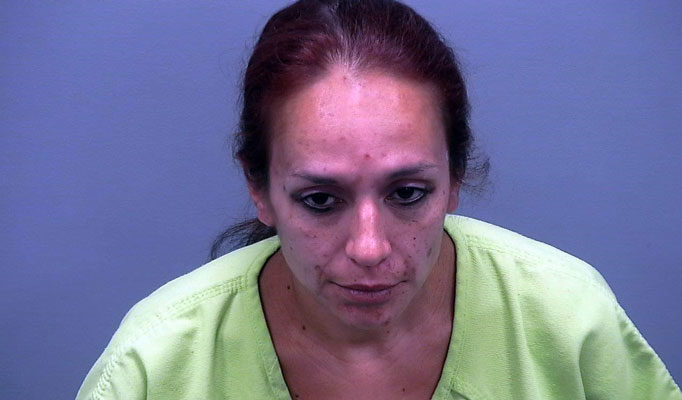 Contributed Photo/Courtesy GCSO: Anna Craig, 40, was booked into the jail on charges of aggravated assault and disorderly conduct after allegedly stabbing her ex-boyfriend with deer antlers during an argument.

GRAHAM COUNTY – A domestic squabble between ex-lovers ended with a trip to the hospital and then jail.

Anna Craig, 40, was arrested Saturday and booked into the Graham County Adult Detention Facility on charges of aggravated assault and disorderly conduct after allegedly stabbing her ex-boyfriend with deer antlers during an argument over another woman.

Deputies were initially dispatched to Norton Road at about 9:07 a.m. when a resident called about a man and woman fighting in front of his residence. The respondent said he and some co-workers heard a bunch of screaming and yelling and that the male subject came over and asked him to call 911 because the female subject (Craig) had stabbed him with a set of deer antlers he had on his truck’s dashboard.

After initially not being able to find the woman, a Pima Police officer advised he had prior domestic incidents with the couple and identified the woman as Craig. The Pima officer and deputy then went to check an address on Bigler Avenue and located Craig, who was wearing clothing that matched the description of the female suspect.

According to the Graham County Sheriff’s Office report, the victim and Craig previously had an intimate relationship and the victim had given Craig a ride the previous night when she was released from the Mt. Graham Regional Medical Center after being treated for a dog bite. The victim, who later flagged the deputy down at the corner of Stadium Avenue and U.S. Highway 70, said after getting into an argument that night, Craig left him at Walmart and he didn’t see her until the following morning when he was getting gas at the Giant gas station at the same location on Stadium Avenue and was surprised to see her in his truck in the passenger seat when the came out of the store. He said Craig asked him to give her a ride to Pima, and during the ride, she became combative because she believed he was involved in an intimate relationship with a co-worker.

When interviewed, Craig informed the deputy about her dog bite and said she had walked from Safford to Thatcher that morning and saw the victim’s truck at the gas station. She said the victim agreed to give her a ride to Pima but an argument over the woman ensued and that the victim had struck her repeatedly and kicked her injured arm. She also said he had thrown his 44-ounce fountain drink at her and threatened to beat her up. Only then, she said, did she pick up the antlers and strike the victim. The officer noted that there appeared to be no marks on the victim and she did not appear to have been doused with soda.

The victim told the story a bit different and said Craig was the one who initiated the physical confrontation and had kicked his soda, spilling it all over his truck. He said Craig began hitting and kicking him while he was driving and then grabbed the deer antlers and stabbed him, breaking the antlers in the process. He added that he never struck Craig or kicked her.

The deputy noted several puncture wounds with fresh blood on the victim’s leg and the inside driver’s area of the truck’s floor and the steering wheel were covered with a wet and sticky liquid. The victim refused medical attention for his injuries.

Craig was then arrested and transported to the jail but a nurse advised she would have to be medically cleared by the hospital due to her dog bite. At the hospital, Craig claimed there was a shoe print on her arm where she said the victim had kicked her dog bite, but a comparison with the shoes the victim was wearing did not match the mark above the bite.

After she was medically cleared, Craig was booked into the jail for the night and was then released the following day.