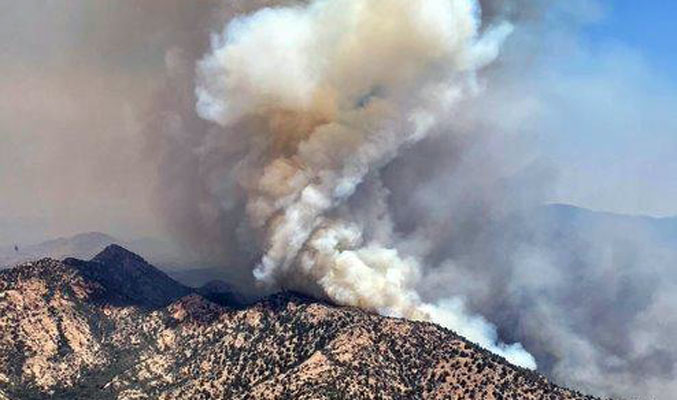 Contributed Photo: The Pinnacle Fire was listed at 31,715 acres with 25% containment as of Sunday morning.

SANTA TERESA WILDERNESS – The Pinnacle Fire continued to move within the Santa Teresa Wilderness Saturday, generating another substantial column of smoke by mid-afternoon. Fire activity increased towards the north in two separate locations. The first, west of Black Rock Ranch and the other along the western boundary of the Wilderness. Both moved into canyon bottoms with abundant fuels and began to burn with intensity. Firefighters responded with helicopter water and retardant drops to cool some of the activity as both threatened private property outside the wilderness.

The wind is generated by the location of a high-pressure ridge overhead, which is presently moving slowly to the southwest from its current location over the Four Corners area. This movement yesterday created a gradual wind direction shift from southeast to north-northwest winds. Due to the slow movement of the ridge, it was late in the day before the shift occurred. The wind shift is significant as it pushed the fire in new directions. Firefighters have prepared outside the Santa Teresa Wilderness with constructed bulldozer lines to defend private property and other values.

The eastern and southern portions of the fire remain calm with little fire activity. All of the declared containment of the fire line exists along this portion of the fire.

Currently assigned resources include five hand crews, four helicopters, 28 engines, 11 water tenders, and four dozers. Resource numbers are adjusted as operational needs are determined daily and within the constraints of competition from other fires across Arizona.

Evacuations:
GO: All Black Rock Road area residences, and all residences in the Klondyke-Aravaipa corridor in Graham County. For “Ready, Set, Go” information follow this link: https://wildlandfire.az.gov/ and https://ein.az.gov/ready-set-go.

Closures: The existing FAA-designated Temporary Flight Restriction for the fire area has again been adjusted to compensate for fire growth. The Coronado National Forest, Bureau of Indian Affairs, and the Bureau of Land Management have closure orders in effect.

Restrictions: Throughout southern Arizona, multiple agencies and jurisdictions are in varying levels of restrictions. For specific information for each, visit the link https://wildlandfire.az.gov/fire-restrictions.