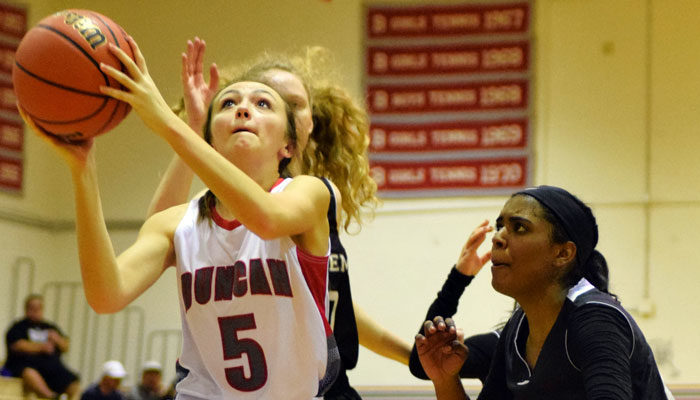 Raymundo Frasquillo Photo/Gila Herald: Duncan sophomore guard Janye Eddy drives to the basket for a layup against the Academy of Tucson on Dec. 6. The Wildkats posted a 43-26 win for the initial one of the season.

Thirteen Wildkats are out for the first-year DHS girls coach, an increase of five from the first week ofcompetition. The roster includes four seniors, two juniors, four sophomores,and three freshmen.

None of the Wildkats have averaged double-digit scoring, but the players are working at it. Melissa Claridge is averaging 9.4 (47) points per game.

The Wildkats have a combined free throw shooting percentage of 41 (26-64) compared to 45 (31-69) for their opponents through five games.

The Wildkats led 19-5 after the opening period, 30-10 at halftime and 40-24 at the start of the final period. The Scarlet and Gray scored in double figures during three of the four periods compared to one of four for the visitors. It was something the Wildkats had not seen on the scoreboard this season.

Eight of 12 Wildkats contributed scoring with three in double figures. Damron had 12 points and the Claridge sisters 10 apiece. Stergion added four points, Billingsley, Eddy, and Lacey two each, and Basteen one.

For the Lynx, five of six players scored with none having more than eight points.

The visiting Lobos had double-digit scoring in two of four periods while the Wildkats were limited to single digits in each period. Hayden led by a 2-to-1 ratio, 28-14, at halftime and 32-21 heading into the final period.

Duncan trailed by 10, 14-4 following the opening period, by 21, 25-4, at halftime, and 28, 35-7 at the start of the fourth period. The visitors put up double-digit scoring in three of four periods compared to none by the Wildkats.

Five of seven Knights scored with Emily Haynes getting 10 points. Four others contributed 31 pointswith none getting fewer than five.

Duncan jumped out to a 13-8opening period advantage and led 19-16 at halftime. However, a 17-4 Cougars’ second-half outing helped spell defeat for the Wildkats.

Seven of 11 Cougars scored with junior Nyomi Hernandez getting 16 points.

The Wildkats trailed 14-2 following the opening period and 30-6 at halftime in the season opener. Duncanwas outscored 15-11 in the second half.