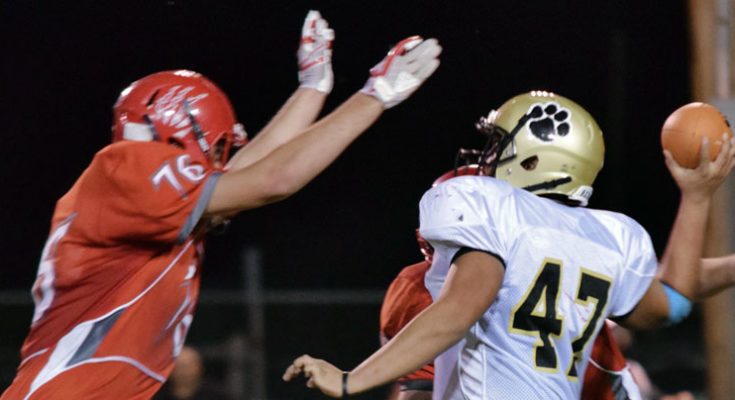 DUNCAN – A historic three-game run has ended and the best thing about the 2018 Duncan football team is the improvement.

“We’re getting better every week,” first-year head coach Eric Bejarano said. “We’re where we need to be (at this point in the season).”

Midway through its season, Duncan has averaged a score of 31-20 (123-80) through four games against opponents with combined overall records of 5-7. In its second half, the Scarlet and Gray face teams with combined 7-8 records.

Salome scored during the opening quarter at 2:37. Duncan answered with nine seconds elapsed in the second period. A Jason McGrath to Tanner Brown 30-yard pass plus successful 2-point conversion knotted the score at 8-8.

The Frogs scored the next 20 points on three touchdowns plus a conversion before the Wildkats crossed the goal line again. Wesley Conyer turned a McGrath pass into a 38-yard score with 34 seconds elapsed in the final period.

The Wildkats earned 12 first downs and netted 262 yards, 165 on 39 carries and 97 on five passes. Additionally, Duncan gained 106 return yards, did not punt, lost two of two fumbles, and drew 70 yards on 10 penalties.

McGrath completed 4-12 passes for 86 yards with two interceptions, Conyer 1-11 for 20 yards, and Brown 0-7 with an interception. Five different Wildkats each caught a pass, Conyer for 38 yards, Brown and Christopher Smith for 20 yards apiece, McGrath for 11 yards, and Cesar Contreras for 8 yards.

Defensively, Conyer totaled 14 tackles and Contreras 13 plus a quarterback sack.

Duncan struggled with 13 Cougars on Packer Field early but settled down as the game progressed. The Wildkats fumbled the ball the first time touching it with 3:13 elapsed. However, the Cougars had two possessions and snapped 10 plays, punting twice on fourth-and-19, before the Wildkats ran their initial offensive play, a 55-yard Conyer touchdown run with more than five minutes elapsed in the game. A Contreras conversion run gave the hosts an 8-0 advantage.

The Wildkats limited the visitors to eight yards and forced a third punt, gained 52 yards before fumbling a second time, forced another punt after a 52-yard gain, and Basteen returned it 15 yards for a second score. Duncan led 14-0 with 53 seconds left in the opening period.

Bowie/San Simon gained 12 yards and punted; the Wildkats were sacked on fourth down, and the Cougars narrowed the deficit to eight points with a first-down touchdown as Brandon Martinez hooked up with Nathaniel Diaz on a 56-yard pass with 7:07 left in the first half.

Duncan’s next two possessions totaled three plays, as Conyer and Contreras scored once each plus a Contreras conversion run, for a 28-6 advantage with five minutes left in the half.

The Cougars were short on fourth down, and Brody Heap returned a fumble 64 yards for their second score. His conversion run was stopped.

Conyer took a first-down handoff 35 yards to the end zone with no time left, giving the Wildkats a 34-12 halftime advantage.

The Cougars also had three second-half possessions, ending on a fourth-and-17 punt after gaining 21 yards, short on fourth-and-5 after a 38-yard gain, and ran out of time on its own half of the field.

Duncan totaled five first downs in gaining 402 yards on 26 carries and 20 yards on a pass. The Wildkats also netted 146 return yards, did not punt, lost three of three fumbles, and were assessed 60 yards on five penalties.

Duncan recorded a historic 52-8 win, defeating the Fredonia Lynx in the inaugural pairing of the two teams. The game was held in the Walkup Skydome on the Northern Arizona University campus Aug. 24.

The Wildkats received the ball with 2:15 remaining to be played and McGrath took a knee as needed to wind down the clock. Duncan led 52-8 after three periods, 46-0 at half halftime, and 16-0 following the opening period.

A running clock, after scoring on a Cliff Hansen fumble recovery with 3:27 left in the first half and a Smith conversion run, was in effect for most of the second half.

Fredonia crossed the goal line with 6:23 left in the third period to narrow the deficit to 30 points. However, a Contreras 1-yard run 1:23 later again prompted the running clock.

Smith started the Wildkats’ scoring on an 11-yard run and Conyer added the conversion run during the opening 3:13. A Brown 15-yard run along with a Brown to Contreras aerial gave Duncan a 16-0 advantage with 2:10 left in the first period.

“It was a good experience,” Bejarano said. “We noticed our fans. There were about three dozen family members on hand.”

Three days of practice in preparation for the game included extra running.

“We (coaches) didn’t tell them (players) the reason,” he said. “It (extra running) was because of the altitude. They handled it pretty good.” (sic)

Additionally, the Scarlet and Gray netted 110 return yards, punted once for 37 yards, recovered its two fumbles, and had one penalty of 15 yards.