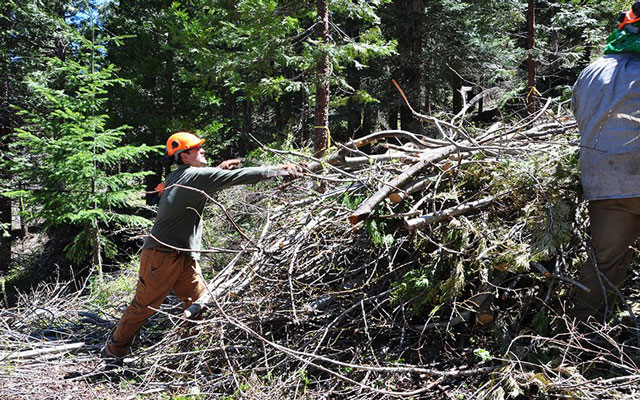 Photo By Tracy Robillard, Natural Resources Conservation Service/Creative Commons: Forestry experts believe one of the best ways to fight wildfires is to deprive them of fuel through forest thinning, as in this file photo from Oregon. Those efforts will bet an extra hand this year in Arizona under an expanded program that will use prison inmates to help with the forest maintenance.

That’s when an expansion of a long-running program that lets the department use inmate crews for forest maintenance will allow for the possible addition of 700 more inmates – or 1,400 more boots.

“This is a win-win for inmates and for the state and agencies that are benefitting from the work,” said Donna Leone Hamm, executive director of Middle Ground Prison Reform.

“Any time an inmate is allowed to leave the correctional facility and go into the community to work … that alternative alone is beneficial to the inmate because they don’t feel the sense of confinement so deeply when they are out in the community,” she said of the program.

The expansion is part of the state’s Healthy Forest Initiative, a $24.5 million plan for wildfire prevention and forest maintenance approved by the Legislature this spring. As he signed authorizing legislation in March, Gov. Doug Ducey said the plan would allow more than 700 inmates over the next two years to be part of the forest maintenance crews in fire-prone areas, clearing brush and doing other work in hopes of stopping wildfires in the first place.

The plan comes on the heels of a 2020 wildfire season that saw 2,520 wildfires burn nearly 980,000 acres of state, federal and tribal lands across the state, according to the forestry department. That was the most since 2011 when more than 1 million acres in the state burned.

Only a fraction of the funding will go to inmates, who can be paid no more than $3 an hour. But participating inmates get experience that can help them find jobs when they get out, officials said.

Davila said some post-release inmates have “walked right out of prison and into a full-time job with the state of Arizona.”

She said the forestry department already has a dozen 20-member inmate “hand crews” in place that work in forest thinning and one “initial attack” crew in Phoenix, consisting of mostly post-release inmates, which may be called in to do firefighting as well as fire prevention work.

The expanded program begins July 1, with the start of the 2022 fiscal year.

“We’ll be able to start getting overhead (supervisors) hired, supplies, equipment, and things of that nature,” Davila said. “These folks are going to have to be trained on how to use saws, properly and safely for the work that they will be doing. The project work will need to be funded as well, it’s not free.”

Davila said the crews do “a bunch of positive things” besides fire prevention, including improving the overall health of forests.

Hamm said women will be included in groundwork crews, which she called “fairly unusual.”

“A lot of times, female inmates are relegated to what some might consider stereotypical female work when they are assigning jobs,” Hamm said. “So this is outside of that stereotypical job description and it’s empowering and healthy for the inmates who get to participate in it, male and female.”

She said that by being out and working in the community, the program can help inmates develop “a sense of pride in their community and that can lead over into all aspect of their lives.”

While there is not always “a direct linear connection” between the program and a job, there are other indirect benefits for inmates, Hamm said, like meeting people and possibly making “an impression on an employer or supervisor, that can transfer to a direct job offer upon release.”

“The more ambiguous benefit is that it prepares inmates to interact with employers … it prepares them for the experience of working for another person,” she said.

Davila, noting that nine out of 10 wildfires are caused by humans, said it is “important that people do their part.” But the inmate crews will help, she said.

“This will … allow us to get more work done in a faster amount of time because we will now have more boots on the ground,” Davila said.