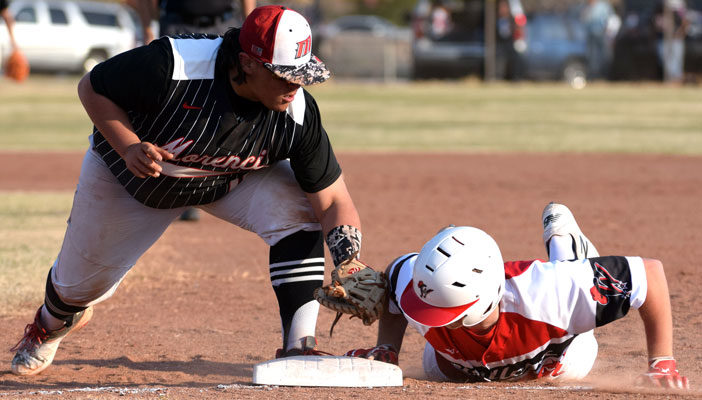 Raymundo Frasquillo Photo/Gila Herald: Morenci junior Omar Ortega turns to make a tag on a Willcox base runner. The Wildcats won the home region contest 8-5 on March 5. Ortega made 10 putouts and committed an error for a .909 (10-11) fielding average.

Morenci brought back a 4-2 record from its three-day participation in the Florence High-sponsored Joe Padilla Tourney on March 2. The Wildcats downed Superior 3-2 and Eagar Round Valley 7-0 on Feb. 28 plus Show Low 6-5 and Miami 7-6 on March 2. The losses were 14-1 to Chandler Valley Christian on March 1 and 11-0 to Thatcher on March 2.

Morenci broke a scoreless deadlock the first time at bat, driving in walked senior Antonio Gallegos on a sacrifice fly and singled junior Zachary Waltrip on sophomore Maddux Martinez’ double with two outs for a 2-0 lead.

Sophomore Lance Morey singled in a singled Maddux, senior Desmon Sandoval singled in Morey, and singled junior Brandon Blair went in on a passed ball, all with two outs in the third for a 5-3 Morenci advantage.

The Wildcats added two runs in the fourth with two outs and one in the fifth with one out to go ahead 8-3. Singled senior Christopher Roybal was doubled in by Maddux who was sent home on an interference call by the third baseman, and singled senior Trey Trujillo came in on a passed ball.

Willcox crossed the plate on a fielder’s choice that recorded the second out in the second inning and twice in the third, singled in by senior Tanner DeBaun and double in by Kerry Durazo with two outs for a 3-2 Cowboys’ edge.

The visitors went three up and three down in the fourth, left one of four batters on in both the fifth and sixth, and added two runs in the seventh for the final 8-5 score. Beaned junior David Peterson scored on a passed ball with one out and singled senior Eli Madrid crossed the plate on a ground out.